Tokyo Tech researchers show that pausing occurs frequently when proteins are being synthesized.

By studying the synthesis process of proteins encoded by over 1,000 genes in E. coli bacteria, researchers at Tokyo Tech in collaboration with colleagues at Kyoto Sangyo University, have shown that the cellular process of creating proteins (called "translation") temporarily stops more often than previously thought. Furthermore, they discovered that some proteins pause more often than others during the translation. These discoveries increase our understanding of protein regulation and pave the way for new discoveries on how genetic material encodes the components needed for cells to function.

Proteins are the main end-products encoded by genes and are translated by cellular machinery called ribosomes, which add individual amino acids one-by-one to the end of a polypeptide chain. Earlier studies have shown that there are pauses during this process. However, past approaches have failed to provide precise information about how, why, and how often such pausing occurs.

A new method that can illuminate this pausing in protein synthesis has been developed. It takes advantage of a specific molecule, which binds the ends of these nascent proteins and is involved in ensuring that additions to the end of the protein chain match the original genetic code.

"Proteins take from dozens of seconds to a few minutes to make. This is mainly because of their different lengths, but earlier findings showed that pausing of protein synthesis also occurs," says Hideki Taguchi of the Graduate School of Bioscience and Biotechnology, Tokyo Tech. "Our new method reveals that such pausing is very common, and that it depends on factors like the sequence of the protein that is being made and other molecules that are present within cells."

Understanding a new form of regulation

The findings provide new insights into how the production of proteins is regulated. For example, if the production of a protein is paused for a certain period, then the ribosome machinery involved in this process cannot get to work on producing another protein, offering a way of regulating the level of that protein in the cell. The research team also showed that the likelihood of pausing is dependent on whether the protein is destined to be incorporated within a membrane or will be free to move within the cell.

"Only 71 of the 1,038 genes that we studied had no pausing during protein synthesis," adds Yuhei Chadani. "Also, the amount of data that we obtained enabled us to see trends in the pausing and to identify short protein sequences that strongly increase the likelihood of it happening. We now know much more about this extra layer of regulation that cells use to control the range of proteins that they produce."

It is anticipated that the findings of this study will add to scientists' understanding of the interplay among the multiple regulatory systems used by cells and the reasons for their dysfunction. This large-scale analytical approach can also be applied in combination with higher-resolution analyses to precisely characterize the mechanisms behind the pausing of protein building. 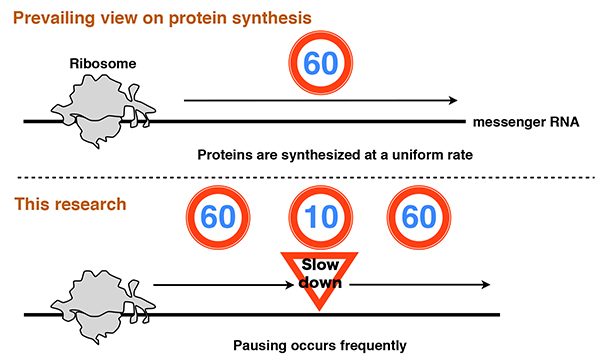 Figure. When proteins are being synthesized pausing occurs frequently.