Researchers centered at Tokyo Tech characterize the exact mode of binding of a single molecule between two gold electrodes, which will help in constructing molecular circuits with consistent electrical properties.

Building extremely small electronic components and circuits made from individual molecules requires manipulation of the molecules into the desired arrangement. However, this remains difficult because of inconsistency in sites where molecules attach within nano-sized "circuit boards" and in the properties they exhibit in such circuits. Various research teams have sought to overcome this by studying single molecules positioned in a tiny gap between two electrodes, but obstacles to characterizing their positional and electrical features have surfaced.

A research team centered at Tokyo Tech has now precisely characterized the type of binding of a single molecule between two gold electrodes. The researchers measured the current flow when this single molecule bridged the gap between the electrodes and completed an electrical circuit, as well as the measuring the Roman scattering. Their measurements revealed the exact sites at which each end of this molecule connected with the tips of the gold electrodes, and indicated that the molecule preferentially took on three different arrangements (or bindings). This breakthrough should help to ensure site-specific binding of individual molecules used as components in nano-sized electronic circuits, making such circuits more reliable.

Recently reported in the Journal of the American Chemical Society, this novel approach using two different analytical procedures was applied to clarify exactly how a single molecule of benzenedithiol bridged a gap of two-billionths of a meter between two gold electrodes and completed an electrical circuit. These two procedures involved measuring the current and voltage through the circuit while simultaneously analyzing the Raman scattering from a laser focused on the electrode gap. Data from over 200 of these so-called "single-molecule junctions" showed that three benzenedithiol configurations dominated, in terms of how they attached to the electrode tips, and it was possible to distinguish between them using these procedures. This novel approach can thus reveal the exact configuration of a single molecule, which enables precise construction of molecular-based circuits.

The researchers established the single-molecule junction by starting with a very narrow, unbroken section of gold, onto which they dropped a solution containing the benzenedithiol. "We then stretched the gold until it broke, at which point a single molecule in this solution bridged the newly created gap," lead author Satoshi Kaneko says. "We could follow this breakage in real time by measuring the current flowing through the circuit, and we referred to the typical conductance values to confirm that the circuit was reconnected by benzenedithiol."

The particular novelty of the study arises from the fact that current/voltage measurements across a single-molecule junction were combined with analysis by surface-enhanced Raman scattering, a highly sensitive method of characterizing molecules by their scattering of light. This is particularly useful for analyzing single molecules. The approach was supported by the large number of times in which a single-molecule junction was created, allowing an extensive data set to be obtained and subjected to statistical analyses.

"We can now ensure site-specific adsorption of a single molecule, and this should make it possible to reliably integrate individual molecules onto metal surfaces," coauthor Manabu Kiguchi says. "This reliability is a major step forward for molecular electronics and for creation of useful molecular circuits."

The researchers hope this spectro-electric hybrid technique will be widely adopted in their field of study and boost the ability to manipulate individual molecules and create nano-sized circuits. 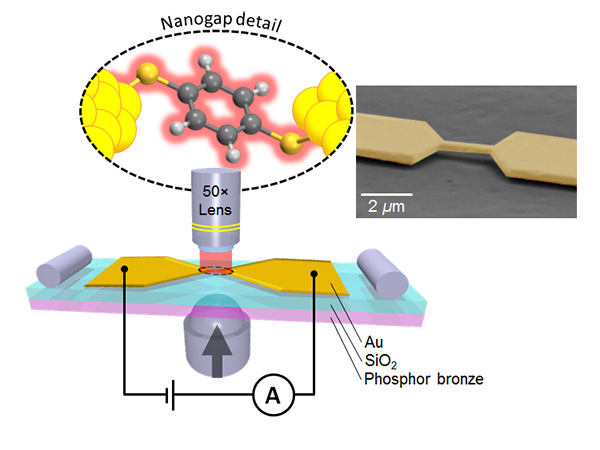 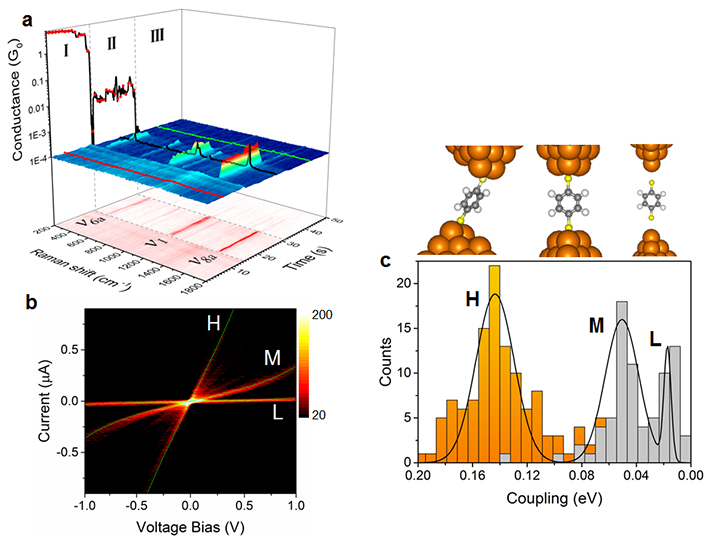 Figure 2.
(a) Three-dimensional representation of the temporal evolution of SERS and conductance measurements upon rupture of the Au contact. Three distinct regions can be distinguished: (I) unbroken metallic contact, (II) the single-molecule regime, and (III) the broken contact regime. (b) Bi-dimensional I-V histogram summarizing the I-V response of single-molecule BDT junctions. (c) Statistical distribution of metal-molecule coupling obtained from the individual single-molecule I-V responses, together with the structural models. Orange-colored counts, centered on H, correspond to SERS active samples.