Scientists at Tokyo Institute of Technology have developed a statistical method that obtains detailed descriptions of metal-molecule interfaces in single molecule junctions and verifies how molecular conformation can influence their performance. Their insights could help fine-tune the capabilities of nanoscale circuits.

Components for traditional electronic circuits are made from bulk materials. As demand grows for circuits to be built on a smaller and smaller scale, researchers have begun to build tiny nanoscale components from individual atoms. Single molecules are now doing the job of larger components in nanoscale electrical circuits.

The electronic conductance of a single molecule junction — in other words, how easy it is for an electric current to pass through it - is highly sensitive to contact between the metal electrodes and single molecules, and can also be affected by different molecular conformations. Yuki Komoto, Shintaro Fujii and co-workers at the Tokyo Institute of Technology, in collaboration with researchers across Japan, have developed a statistical approach that generates detailed pictures of the metal-molecule interface in these junctions.

The approach generates a correlated statistical description of both current and voltage characteristics, which provides useful details about molecule-electrode coupling and associated energy differences within the junctions. The team tested their approach on three different kinds of single molecule junction; 1,4-benzenediamine (BDA), 1,4-butanediamiine (C4DA) and 1,4-benzenedithiol (BDT). The electrodes in each case were made of gold. For both BDA and C4DA, the researchers simulated one single interfacial configuration, but for BDT they resolved three different interfacial arrangements.

The researchers hope their method will enable scientists to visualize the details of molecule-metal interfaces in single molecule junctions, and help enhance junction performance.

Built in a lab from individual atoms, single molecule junctions can be carefully designed and manipulated to create precise, desired effects in nanoscale electronics. However, it is incredibly challenging to monitor the molecular-level interactions that occur between the single molecules and the other components in these junctions. The ease with which an electric current can flow through the junction — its conductance - is highly sensitive to tiny changes caused by the contact between the molecule and the metal electrodes, for example. As such, scientists have been trying to find ways of generating detailed pictures of single molecule junctions, how they respond to changes in voltage and current and how their molecular structure at the interface with the electrodes influences their conductance ability.

The statistical approach developed by Komoto, Fujii and co-workers allowed them to characterize the electronic and structural properties of different junctions in depth. The method examined thousands of current-voltage measurements taken across junctions made with three different molecules. C4DA, the only molecule with a flexible backbone (the other two were rigid), displayed significant current fluctuation with a number of conductance band structures dependent on the shape of the molecule and its coupling (binding) strength.

In addition, the researchers showed how the position of a molecule and the electrodes can alter a junction's conductance. In junctions created with a BDT molecule, the conductance was at its greatest when the molecule was placed in one of three 'bridging' positions (see image) — other conformations at the metal-molecule interface produced lower conductance.

This promising approach will enable scientists to optimize nanoscale electronic circuits by selecting the best molecular conformations for the conductance required. It will also enhance theoretical knowledge of how single molecule junctions perform. 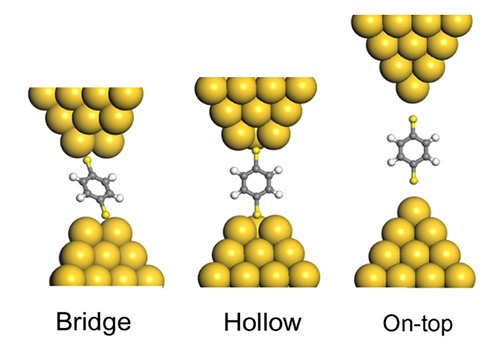 Figure 1. 5b from paper, or similar