This "artificial muscle" could also be the breakthrough needed for nursing care instruments and new robots, such as humanoid robots with movement as smooth as humans or ultra-lightweight robots.

The plan is to commence sample shipments in July to user manufacturers and research institutions using artificial muscles with the aim of developing uses and applications. General sales to small-lot users over the Internet are planned to start in the next fiscal year.

This artificial muscle has been the subject of research since 2011, led by those such as Professor Koichi Suzumori of the School of Engineering, Tokyo Tech and Associate Professor Shuichi Wakimoto of the Graduate School of Natural Science and Technology, Okayama University. During that course, many manufacturers and research institutions related to apparel, nursing care instruments, robots, and the like requested the use of this artificial muscle. As a result, the company was established by Professor Suzumori and Associate Professor Wakimoto, in cooperation with Ikeda Seichusho Co., Ltd. and Koganei Corporation.

There are several methods in the research and development of artificial muscles. The method developed by s-muscle is one called McKibben artificial muscle[1]. This artificial muscle is thin, flexible, light, and strong, which is not seen in conventional models. By using these characteristics, various applications such as soft machines for contact with humans and new robot mechanisms can be anticipated.

Samples of thin artificial muscle to be sold

The outer diameter is 2 to 5 mm, with a contraction ratio[2]of 20 to 25% and a maximum contraction force[3]of approximately 30 kgf per 1 cm2. Multiple artificial muscle fibers can be bundled to construct various forms of muscle. 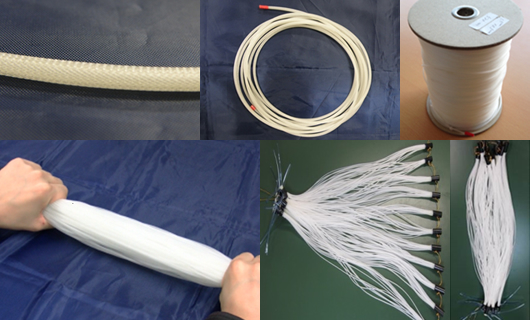 By weaving it into fabric form, we aim for application into power suits and supporters which are soft, light, and comfortable.

The research on Powered Suits was partially supported by Cross-ministerial Strategic Innovation Promotion Program in FY 2014/2015.

It can be applied to new robots, such as ultra-lightweight or long-body robots, humanoid musculoskeletal robots, and soft robotics. 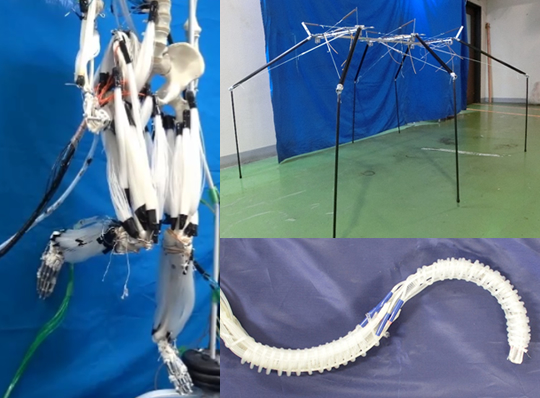 In July of this year, we will commence sample shipments of artificial muscle for functionality testing to manufacturers and research facilities considering application of thin artificial muscle to support suits, nursing care equipment, and robotics. Three types will be made available—with outer diameters of 2 mm, 2.5 mm, and 4.8 mm— and will be sold in forms in response to requests, such as for artificial muscle only, assembled product, or driving units. At s-muscle, the customer, Tokyo Institute of Technology, and Okayama University will collaborate to advance the design, development, and application options of thin artificial muscle. Parts of operations such as sales and manufacturing will be entrusted to Ikeda Seichusho and Koganei.

Low-cost artificial muscle for popular use is scheduled to be made available by spring 2017. In cooperation with customer manufacturers and research institutions, we will endeavor to propagate support suits, nursing care equipment, robotics, and other applications of thin artificial muscle. We also plan to seek popularization of this artificial muscle by commencing small-lot sales to general users over the Internet.

1. McKibben artificial muscles : A structure of a rubber tube covered with knit mesh. Supplying air inside the tube causes it to contract along the length of the tube. The principle was developed in the U.S.A. around 1960 and several companies manufacture it today. Other types of artificial muscle have been developed, such as those using polymeric materials or electrostatic force. However, McKibben artificial muscle is the only type which has been able to attain the power and contraction force necessary for practical applications.