KMITL and Tokyo Tech have conducted ongoing education and research exchanges since concluding a university-wide cooperation agreement in 1992. KMITL has also partnered with Tokyo Tech as part of Thailand Advanced Institute of Science and Technology (TAIST) -Tokyo Tech, an international joint graduate program established in 2007 in cooperation with Thailand's National Science and Technology Development Agency (NSTDA) and Thai universities. KMITL has offered the Automotive Engineering Course for TAIST-Tokyo Tech since the program's inception.

After Mishima's greeting, Suwansawat made a short presentation about KMITL. Originally established as a training center by Japan International Cooperation Agency in 1960, KMITL is now the largest science and engineering university in Thailand. Around 25,000 students, including 4,600 graduate students, are enrolled in the Faculties of Engineering, Architecture, Industrial Education, Science, Agricultural Technology, Information Technology, Agro-Industry, and Administration and Management, and three Colleges on KMITL's two campuses in Bangkok and Chumphon. Suwansawat introduced the university's ambitious plans to establish centers for innovation, a medical center, and a Tech Square in the next few years.

One of the purposes of the visit was to exchange opinions on human resource development and the construction and management of campus IT Networks, and the delegation discussed those topics with Okada and Tomoishi, respectively.

As the meeting concluded, the two presidents confirmed their intent to further strengthen the partnership between KMITL and Tokyo Tech. 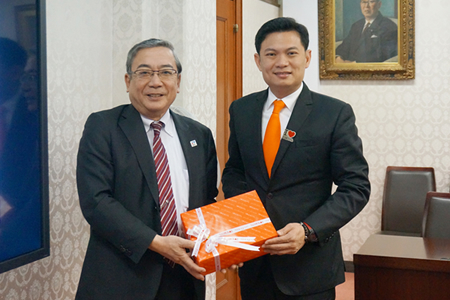 *
This article has been updated to correct a grammatical error on June 16.