The prizes are awarded to researchers who have exhibited exceptional performance in one of five categories of Development, Research, Technology, Science and Technology Promotion, or Public Understanding Promotion. Two Tokyo Tech faculty members received prizes for research, while two received prizes for the promotion of public understanding. The four recipients spoke about their work.

Prize for Science and Technology (Research) 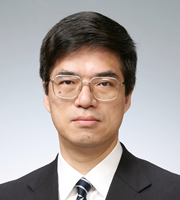 Development of methods for the fixation of CO2 as a carbon resource into useful organic compounds is one way to address the issue of dwindling fossil resources. Carbon dioxide's low reactivity, however, has been an obstacle to research and development of an efficient catalytic system for CO2 fixation reactions.

These results were made possible by the perseverance of students working by trial and error to discover new possibilities as we struggled against defeat. I deeply appreciate the effort and energy they put into this project.

Prize-winning research: Signal processing based on the fixed-point expression of a nonexpansive mapping

Developing alongside mathematics, signal processing has kept on evolving since the time of Euclid as a fundamental technique for estimating valuable information from observed data. It has been applied to a broad range of measurement and information technology systems. The majority of present-day signal processing technology applies the strategies of least-squares estimation by Gauss and orthogonal function expansion by Fourier, and is commonly based on information expression in terms of subspaces (in the sense of linear algebra) and the orthogonal projection theorem (Pythagorean theorem generalized in Hilbert space). A key to dramatic progress in signal processing must be synergetic effects generated through certain nontrivial integrations of the powerful ideas for set expression and for optimization in modern computational mathematics.

Thanks to spectacular progress in the theory of convex analysis, a variety of information that was not applicable efficiently to signal processing and inverse problems has been revealed to have precise expression as the fixed point set of certain nonexpansive mappings (Fig.1 and 2).

Fig. 1 A conceptual diagram processing based on the fixed-point expression of a nonexpansive mapping

Fig. 2 The nonexpansive mapping and fixed point set utilized in this study

The hybrid steepest descent method in this study was developed by a nontrivial integration of the fixed point theorem and convex optimization, and the world's first algorithm that succeeded in solving generic convex optimization problems defined over the fixed point set of a nonexpansive mapping (Fig. 1). Boldly relaxing this idea, we also developed the adaptive projected subgradient method and successfully solved the problem of asymptotic minimization of sequence of convex functions. These are the central algorithms for applying fully the outstanding ideas in the fixed-point expression of a nonexpansive mapping to signal processing. They have exhibited excellent performance in application to a number of inverse, adaptive signal processing, and online machine learning problems.

It is an honor to have research I have been involved in for so long regarded highly by MEXT. I would like to express my deep appreciation to my students and research partners for their dedication and cooperation. The true value of this study will be tested from now, but I believe that we have reached the starting point for further development. I would like to continue with this research to achieve further results in the field of signal processing, optimization, and inverse problems.

With the rapid growth of information communication technology (ICT), the introduction of programming practice into formal education is now being planned as a government policy. It is essential to discuss the role programming can play in nurturing scientific thinking in children, and how it can be launched. We taught programming mainly in Shimizukubo Elementary School for several years and our solution was to provide the programming as a part of the science curriculum.

These activities helped elementary school students gain a better grasp of science and mathematics and develop their learning skills. In addition to improving their understanding of scientific structures, the activities enhanced the children's logical thinking abilities and strengthened their problem solving abilities through modeling and simulation.

Class for students in higher grades of elementary school 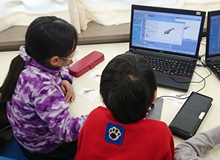 It is our great honor to receive this award. We are indebted to the people of the Ota City Board of Education, Shimizukubo Elementary School, and others for their understanding and support. We would like to expand our activities to many other elementary schools, and hope many pupils who study in our courses gain interest in science and contribute to future society.

This award was made possible by the cooperation and support I received from students and teachers at Shimizukubo Elementary School in Ota City and many others who helped to provide practical lessons for the students. I would like to express my deep appreciation to all of these people.

I will continue to devote myself to the further implementation and dissemination of effective education methods based on scientific data.