The 2nd Round Table Conference on Human Resources Development, organized by the Embassy of Japan in Thailand and Japan International Cooperation Agency (JICA) in collaboration with the Nation Multimedia Group, was held on June 20 at the Westin Grande Sukhumvit in Bangkok. In addition to serving as a discussion panelist, Tokyo Tech President Yoshinao Mishima addressed the conference in a speech entitled "Tokyo Tech's Education Reform and its activities in Thailand."

Approximately 350 participants from Thailand and Japan, including representatives of both governments and leaders of public agencies, universities, companies, and the media attended the second conference. The 1st Round Table Conference was held in March 2016.

The conferences were organized in connection with Japanese Prime Minister Shinzo Abe's Industrial Human Resource Development Cooperation Initiative, announced in November 2015. Through public-private-academia collaboration that seeks to meet the needs of each country through dialogue, the initiative by the Japanese government will support the cultivation of industrial human resources who will contribute to sustainable growth in Asian countries. The Embassy of Japan in Thailand organized the two conferences in Thailand to serve as a venue for sharing achievements in past collaborative efforts between Japan and Thailand, and to address how industrial human resource development cooperation can help meet future needs.

The June event opened with remarks by H.E. Shiro Sadoshima, Ambassador Extraordinary and Plenipotentiary of Japan to the Kingdom of Thailand, and a keynote speech by Dr. Kobsak Pootrakool, Vice Minister for the Office of the Prime Minister of Thailand. Panel discussions focused on the Thai-Japan Human Resources Development Initiative and on career development for young Thai engineers in the manufacturing sector. At the end of the conference, President Mishima spoke on Tokyo Tech's education reform and the Institute's activities in Thailand.

President Mishima also served as a panelist in the first panel discussion. Panelists commented that although many Japanese companies have moved to Thailand and need Thai engineers, the number of well-qualified Thai engineers is not sufficient to meet current industry needs. Policies are needed to address the situation. They agreed on the necessity of working together not only to increase the number of engineers, but also to foster engineers who are creative and possess advanced technical expertise. In the productive dialogue that followed, participants discussed Japan-Thai cooperation activities to educate talented engineers who will support future economic development in Thailand. 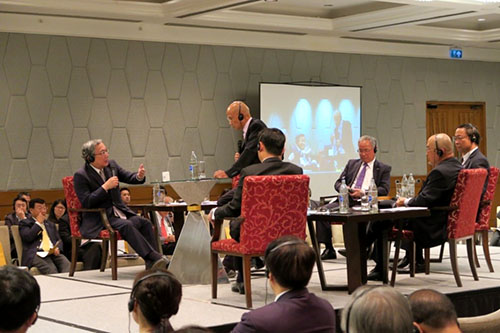 In his address to the conference, Mishima introduced Tokyo Tech's education and research initiatives in Thailand, including collaboration through Thailand Advanced Institute of Science and Technology (TAIST)-Tokyo Tech. Tokyo Tech established the graduate school in cooperation with the National Science and Technology Development Agency (NASTDA) and leading Thai universities in 2007. Mishima explained that, through TAIST-Tokyo Tech, the Institute aims both to foster leaders in the fields of science and technology in Thailand, and to build a human resource network of science and technology leaders in the ASEAN region.

Referring to Tokyo Tech's education reform launched in April 2016, Mishima commented, "It is important for students to use their time at university to find their passions, envision their futures, and use their best efforts to reach their goals. Professors must help them do this. It is the responsibility of the university to cultivate students' growth." He concluded, "Tokyo Tech students are full of life, and we want to educate them so that, as graduates, they will contribute their expertise on the world stage."

Mishima explained the new education system launched by Tokyo Tech as part of the education reforms of April 2016. In order to provide seamless transitions between the curricula of its bachelor's and master's and master's and doctoral degree programs, Tokyo Tech integrated and reorganized the Institute's undergraduate and graduate schools into six new Schools.

With the establishment of the Institute for Liberal Arts, said Mishima, Tokyo Tech is aiming to foster engineers who understand the challenges of the 21st century and possess the social skills, humanity, and creativity to contribute to a global society. Course content across the Institute has also been deepened through a greater emphasis on active and online learning. In addition, various initiatives are underway to strengthen support systems for students.

Mishima also described how the introduction of an academic quarter system is allowing students to make flexible academic plans and take advantage of study abroad and internship opportunities, and commented that enrollment in Tokyo Tech is also more accessible for international students. From April 2019, most graduate major courses will be taught in English. 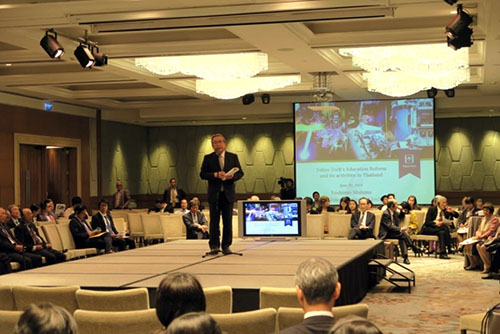 The Embassy of Japan in Thailand is spearheading industrial human resource development cooperation between Japan and Thailand and will implement the Industrial Human Resource Development Cooperation Initiative in Thailand based on the contents of the 1st and 2nd Round Table Conferences.