Researchers have demonstrated that a sufficiently slow deposition produces deep-sea mineral resources for rare-earth elements, on the basis of a new statistical approach. This result provides a key to determine areas of high resource potential worthy of future exploration.

Professor Yasuhiro Kato and researchers at the University of Tokyo and Chiba Institute of Technology, in collaboration with department director Hikaru Iwamori at Japan Agency for Marine-Earth Science and Technology (JAMSTEC), also a visiting professor at Tokyo Institute of Technology have succeeded in decoding a huge data set of chemical composition of deep-sea sediments and in identifying geochemical components closely involved in the formation of rare-earth element and yttrium (REY)-rich mud. They also demonstrated that an underlying key factor of significant REY-enrichment is a sufficiently low sedimentation rate that enables the mud to accumulate REY from seawater. REY-rich mud can be distributed near the seafloor surface in the area satisfying the aforementioned condition, which provides an important constraint to determine areas of high resource potential worthy of future exploration.

REY play essential roles in a variety of high-tech devices. In 2011, the research group of Professor Yasuhiro Kato at the University of Tokyo, demonstrated the widespread distribution of REY-rich mud, or deep-sea sediment containing high concentrations of REY, in the Pacific Ocean. However, the controlling factor of REY-enrichment in deep-sea sediments has remained uncertain.

The researchers constructed a hemisphere-scale compositional dataset of 3,968 deep-sea sediment samples from the Pacific and Indian oceans. By applying Independent Component Analysis on the huge dataset, they successfully extracted statistically independent components including hydrothermal, hydrogenous, and biogenic calcium phosphate components that were closely involved in the formation of REY-rich mud. On the basis of a quantitative evaluation, they found that an underlying key factor of significant REY-enrichment is a sufficiently low sedimentation rate of <0.5 m per million years. Moreover, this study for the first time visualized the spatiotemporal variations of the geochemical independent components during the past 65 million years. The distribution patterns demonstrated that, for example, the migration and aridification of Australian continent had influenced the deposition of REY-rich mud in the South Pacific via a change of eolian dust supply. This indicates an important linkage between the genesis of REY-rich mud and Earth's dynamic phenomena such as climate change and plate tectonics over the geologic time scale. "Although REY-rich mud had been defined solely on the basis of REY concentration, our new research clearly demonstrated that REY-enrichment in the abyssal ocean can be characterized by three different components that are statistically independent," says Professor Kato. He continues, "The present research can suggest a new theoretical approach of highly efficient resource exploration based on data-driven science, and also can provide a novel perspective on the fields of both resource engineering and earth sciences." 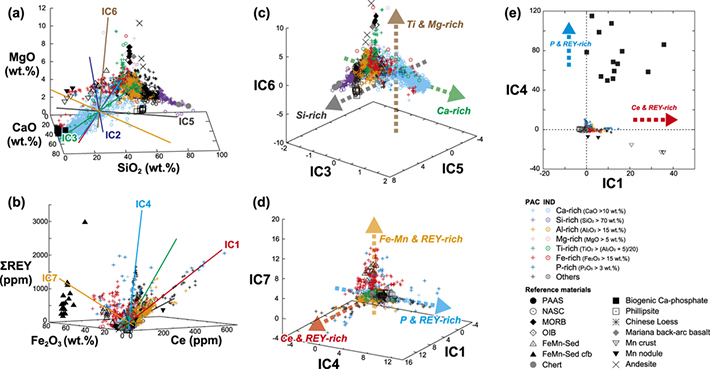 The result of Independent Component Analysis indicates that the 11-dimensional chemical compositions of bulk sediment samples from the Pacific and Indian oceans can be expressed by 7 independent components including biogenic carbonate, biogenic silica, volcanic component, hydrothermal component, hydrogenous component, and biogenic calcium phosphate. The rest one component appears to be unimportant noise. It should be noted that cerium is handled separately because its geochemical behavior differs from that of other REY elements. Therefore, the notation of 'REY' in the figure means the total REY except for cerium. © 2016 Kazutaka Yasukawa at the University of Tokyo