Scientists at Tokyo Tech have developed an approach to control the photoluminescence and solid-state emission of bismuth complexes by complexation with phenylazomethine dendrimers. This research not only sheds light on the structure of a rare, luminescent bismuth complex, but will also be used to advance the potential applications of luminous dendrimers, especially in light harvesting, sensing, electronics, photonics, and nano-medicine.

Precise control of the photoluminescence, or light emission from matter after the absorption of photons, plays a considerable role in the advancement of various optical materials. Modification of the emission intensity, rather than the wavelength, presents a challenge for materials scientists, and simple strategies that can be used to control the intensity of phosphors are desired.

The assembly of photoluminescent components within dendrimers, a class of synthetic polymers with branching, tree-like structures, may be a suitable method for controlling the emission intensity. However, the use of dendrimers as nano-capsules suffers from several drawbacks such as quenched luminescence due to high local concentrations of the phosphors, and controlling the number of phosphors within the dendrimer skeleton is difficult.

To address these challenges, a group of scientists led by Kimihisa Yamamoto from the Laboratory for Chemistry and Life Science at Tokyo Institute of Technology developed luminous dendrimers with finely tunable optical properties using dendritic polyphenylazomethines (DPAs). Due to the electron donating ability of the phenylazomethines, the assembly of the metal ions could be controlled in a radial and stepwise fashion. The semi-rigid structure of the DPAs also allowed for the optical properties of the metal complexes to be maintained by preventing intermolecular electronic interactions. Thus, by careful selection of the ligand, the typical issues encountered with encapsulation of phosphors by dendrimers were overcome, and a new method to control emission intensity was achieved. In addition, the luminescence of the bismuth complexes could be switched on and off by the addition of a Lewis base or by redox control, owing to the reversible coordination bonds within the complexes. As such, Prof. Yamamoto and co-workers showed that the phenylazomethine-bismuth complexes are a new class of stimuli-responsive materials.

Prof. Yamamoto and co-workers formed rare and functional photoluminescent dendrimers containing specific numbers of bismuth ions. The stimuli-responsive optical properties of the bismuth complexes, including the tunable emission intensity, are expected to be useful for the generation of novel sensors and optical standards. The results not only shed light on the structures of the novel bismuth complexes, but will also facilitate the future design of novel functional phosphors, which may have far-reaching applications in a variety of fields. 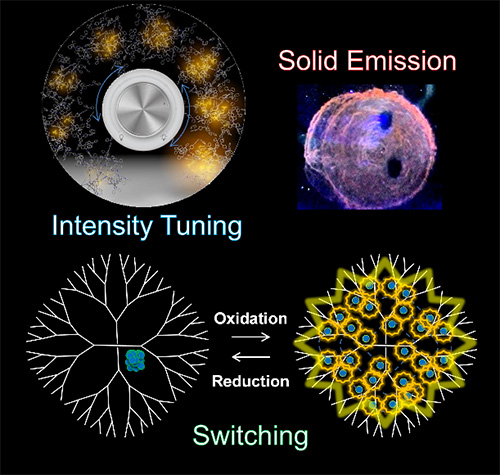 Figure. Luminous phenylazomethine-bismuth complexes were precisely assembled in the dendrimer. The emission intensity of one molecular dendrimer could be controlled by the number of bismuth units. The dendrimer skeleton enabled solid-state emission and optical switching induced by chemical and electronic stimuli.