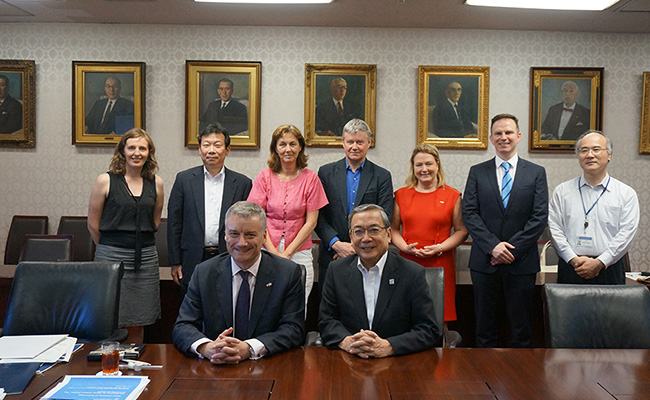 Provost and President Patrick Prendergast of Trinity College Dublin, The University of Dublin, Ireland and his delegation visited Tokyo Tech on July 12 to meet with President Yoshinao Mishima and Vice President for International Affairs Hidetoshi Sekiguchi.

This was the first visit to Japan by the Trinity president.

Highlighting his university's strong networks with industry, Prendergast explained that Dublin has been recognized as a global business hub due to the advantages of its location and language. He noted that the European headquarters of over 750 global companies, including Google and Apple, are located in Dublin and other cities in Ireland. Taking advantage of this environment, Trinity encourages innovative research and entrepreneurship across its curriculum.

In the latter half of the meeting, the presidents confirmed that student and research exchanges are crucial to strengthening cooperation between the two institutions. They also exchanged ideas on research in the fields of engineering, energy, and environment, topics of particular interest at both Tokyo Tech and Trinity College Dublin. Mishima introduced the Environmental Energy Innovation (EEI) Building as an example of the application of Tokyo Tech's research in cutting-edge environmental energy technologies. Prendergast introduced Trinity's new Engineering, Energy and Environment (E3) Institute, which is a major priority of the university. After the meeting, the delegation visited the EEI building. 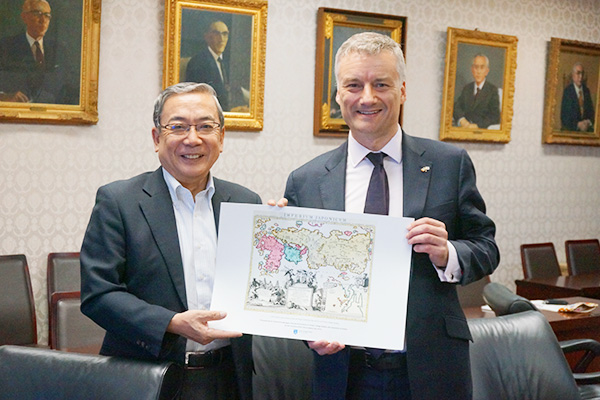 Established in the center of Dublin in 1592, Trinity College Dublin is the top-ranked and oldest university in Ireland. Around 17,000 undergraduate and graduate students from 122 countries are enrolled in 24 departments through the Faculty of Arts, Humanities and Social Science, the Faculty of Engineering, Mathematics and Science, and the Faculty of Health Science. About 30 students are learning Japanese language and culture at the newly established Trinity Centre for Asian Studies. The university library contains 6 million volumes and an extensive collection of manuscripts, the most famous being the Book of Kells.