Scientists at Tokyo Institute of Technology have identified the adlayer structure of the sumanene buckybowl on Au(111) and revealed its unique bowl inversion behavior.

Buckybowls, considered as a fragment of Buckminsterfullerene, are bowl-shaped structurally flexible π-conjugated compounds exhibiting unique coordination chemistry, which allows for the formation of stable adlayers on surfaces of Au(111); these systems serve as important models for studying the electronic properties of metal–molecule interfaces.

Buckybowls, such as corannulene and sumanene, exhibit a characteristic behavior of bowl-to-bowl inversion in solution. In particular, because of the inversion of the bowl-shaped carbon backbone, buckybowls on metal surfaces have an additional degree of freedom with their bowl-up and bowl-down conformations. Although the inversion barrier for sumanene has been reported, dynamic properties of bowl inversion on a surface have yet to be clarified.

Scientists at Tokyo Institute of Technology have successfully reported the formation of a densely packed single layer of sumanene, which readily self-organizes to form a single adlayer. Scanning tunneling microscopy (STM) and ab initio calculations clearly showed the formation of a well-ordered monolayer, indicative of considerable interaction not only between sumanene and the metal substrate but also among molecules.

Interestingly, electronic energy calculation revealed that the bowl-up state is more stable than bowl-down state by 0.1–0.8 eV, with an activation barrier of 0.8 eV, indicating that the sumanene adlayer consists of an entirely single phase with the energetically favorable bowl-up conformation. The unique bowl-shaped structure of sumanene enables it to switch between two discrete states of bowl-up and bowl-down conformations. STM results showed that bowl inversion is observed to be induced by the approach of an STM tip toward sumanene, and the activation barrier was reduced via the approach of this Au tip, confirming that local interaction triggers inversion. Moreover, by tuning such local metal–molecule interaction using the STM tip, the sumanene buckybowl exhibits structural bistability, where the switching rate is two orders of magnitude faster than that of the stochastic inversion process.

This structural switch of surface-adsorbed sumanene can provide new insights into the operating principles of mechano-electronic switches and memory in energy-saving electronic devices, which are gaining widespread popularity. 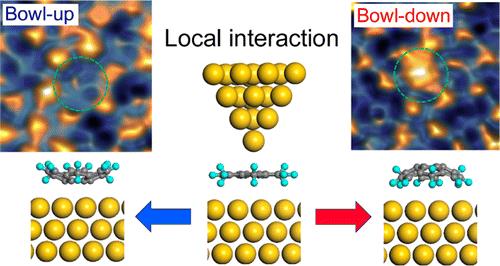 Figure. Schematic of bowl-to-bowl structural inversion on a sumanene surface. Bowl-to-bowl inversion results in the modification of metal?molecule interactions via bistable switching between bowl-up and bowl-down states (indicated by blue and red arrows, respectively) on the surface. Green dotted lines indicate images of bowl inversion events in sumanene.