Scientists at Tokyo Tech have demonstrated that the relatively high levels of precious metals (gold, platinum, etc.) in the Earth's mantle likely originated from one large-scale planetary impact prior to the formation of the Earth's crust. This implies that the early Earth was a more benign place than previously thought, with fewer impacts from space.

The debate surrounding the formation of the planets in our solar system, particularly the terrestrial ('rocky') planets, has been ongoing for many years. Scientists have long used computer models coupled with analysis of ancient meteorites to piece together the most likely scenarios that led to the planets forming as we know them today. A few puzzles still remain, including why Mars is much smaller than most models predict, and why the Earth in particular has a large amount of iron-loving, or 'siderophile', material in its mantle. Metals like gold, platinum and palladium would ordinarily be sequestered in the metallic core. The existing explanation for the latter is that the Earth was pummelled by meteors in its early life, leaving the highly siderophile elements (HSE) beneath the crust.

Now, Ramon Brasser and Shigeru Ida at the Earth-Life Science Institute at Tokyo Institute of Technology, Japan, together with an international team of researchers from the University of Colorado (USA), the University of Dundee (UK) and the University of Oslo (Norway), have shown that the Earth's HSE budget was most likely the result of a single, large-scale impact from space rather than the slow accumulation of material from many smaller meteors. This single impact may or may not have been the same one that created the Moon.

Brasser's team simulated the evolution of the terrestrial planets up to 300 million years after their first formation, a much longer time-scale than in previous studies. They collated information regarding the precious metal budget of Earth, Moon and Mars, and data on lunar cratering, and ran simulations to determine the circumstances that would fit the observations.

Their results show that the total mass of planetesimals - accumulations of planet-forming material floating in space - at the time of the event that formed the Moon was less than previously thought. Mars accumulated 0.06% of its total mass in meteors during the period of the late veneer on Earth. The single, large-scale impact that created Earth's HSE complement was unique to Earth, and must have occurred before the crust had begun to form around 4.45 billion years ago. Brasser and his team have shown that the early Earth at the time of life's emergence was not under a constant, intense bombardment from meteors as previously thought.

There is still much debate around the early formation and behaviour of the planets that orbit our Sun. While the initial formation processes for the terrestrial planets — accumulation of material into 'planetesimals' followed by the gradual growth into full-size planets — is well-researched, it has proven difficult to solve some of the more complex enigmas about the inner solar system.

Recently, the 'Grand Tack' theory was proposed in which Jupiter shifted its path inwards towards the sun before tracking back to its current position. This movement, together with the formation of Saturn and its associated resonance with Jupiter, meant that the two gas planets pulled an immense amount of debris and material away from the inner solar system when they shifted back outwards. This accounts for the smaller size of Mars and for the current composition of the asteroid belt.

Questions regarding the unexplained high levels of iron-loving material (highly siderophile element, or HSE) in the Earth's mantle, and indeed beneath the crust of Mars, still remain.

By combining data from various sources and simulating the early evolution of the terrestrial planets using computer models incorporating the Grand Tack theory, Brasser and his team have provided new insights into the HSE conundrum. Their simulations suggest that the Earth's mantle composition was altered primarily by one large-scale impact — possibly the same impact that created the Moon — rather than by a multitude of small meteor impacts. Their results also show that there was far less debris and material floating in the inner solar system by the time the Moon-forming event occurred than scientists had anticipated. This implies that the early Earth may have been a more benign place than previously thought, and the team suggest that their findings should be incorporated into future simulations of the early solar system. 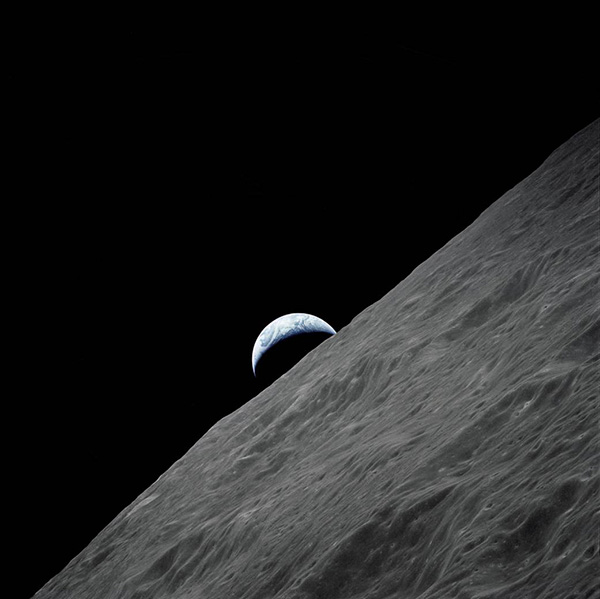 Figure. The crescent Earth rises above the lunar horizon in this spectacular photograph taken from the Apollo 17 spacecraft in lunar orbit during final lunar landing mission in the Apollo program.
Image Credit: NASA