How the African clawed frog got an extra pair of genes

The African clawed frog's ancestor inherited one set of chromosomes each from two different species and doubled its whole genome some 18 million years ago, according to an international research consortium led by Japanese and American scientists who sequenced the entire genome of the Xenopus laevis for the first time. Scientists hope that the finding will help our understanding of vertebrate evolution, as the vertebrate genome doubled twice 500 million years ago.

X. laevis is unusual in that it is a tetraploid species that has four sets of chromosomes, while many organisms, including humans, are diploid and have two sets of chromosomes. How and when this came about has been a topic of debate for some time.

One hypothesis is that the tetraploid X. laevis inherited one half of its genetic material from each parent when two diploid ancestral species mated, and the genome of this diploid offspring then doubled, giving rise to a tetraploid organism with twice the number of chromosomes as its ancestors.

The Japanese team, in which Toshiaki Tanaka at Tokyo Institute of Technology participated, sequenced the entire genome of a frog strain inbred in Japan, in which the genetic codes inherited from the mother and father, respectively, are identical.

The US team led by Dan Rokhsar and Richard Harland at the University of California, Berkeley, used the shotgun method to sequence short fragments of DNA and piece them together like a puzzle. The Japanese team led by Masanori Taira at the University of Tokyo sequenced very long fragments of DNA and determined the location of the long DNA on the chromosomes. This extra step helped to distinguish the separate genome sequences inherited from each ancestral species.

It was a challenging idea to analyze the 'transposable elements' (segments of DNA that move around the genome) that become fixed or inactive over time, but might be one way of tracing the two ancestral genomes, present as subgenomes in X. laevis. Akira Hikosaka at Hiroshima University and Yoshinobu Uno at Nagoya University tested this idea and discovered that indeed two sets of chromosomes originated from different diploid ancestors.

Curiously, the scientists also found that the subgenomes evolved separately in the nucleus, giving rise to shorter S and longer L types, the first evidence of animal subgenome evolution. The L type chromosomes preserved most of the ancestral genetic information, while the S type showed greater gene loss, deletion and rearrangement.

Scientists believe that two rounds of whole genome duplication 500 million years ago contributed to the emergence of the first vertebrate species and an explosion of diversity in this group. The new findings from the X. laevis genome should improve our understanding of this important event in our evolutionary history. 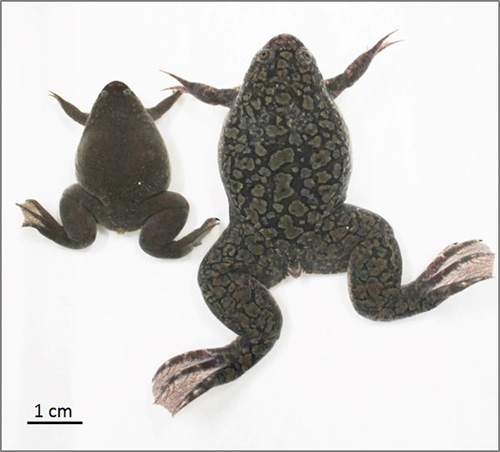 Though similar in appearance, the tetraploid Xenopus laevis adult female is noticeably larger than its counterpart in the related diploid species Xenopus tropicalis.
Copyright: 2016 Shuji Takahashi. 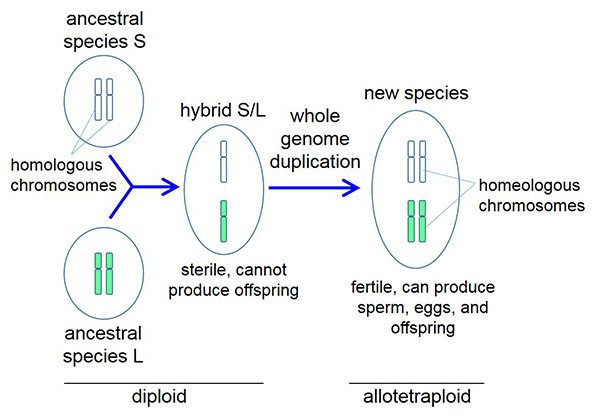 Figure 2. Genesis of the Xenopus ancestor 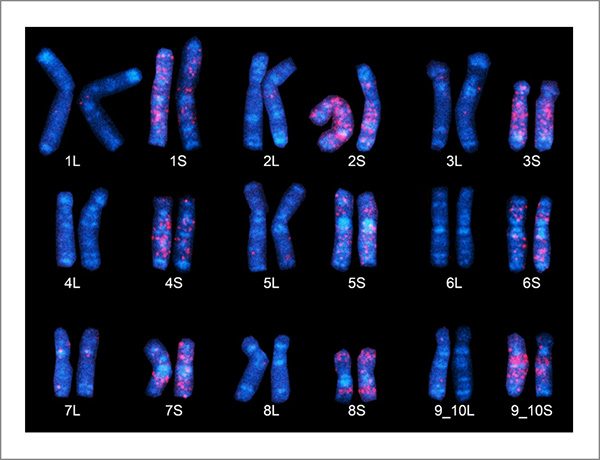 "Fossil" DNA sequences found only in the S subgenome (chromosomes) of Xenopus laevis emit a red glow employing the FISH method. The nine S chromosomes here clearly possess a larger number of red regions, believed to have derived from ancestral species S. (Chromosome 9, at bottom right, is represented as "9_10," as it corresponds to the fusion of ancestral chromosomes corresponding to chromosomes 9 and 10 in Xenopus tropicalis).
Copyright: 2016 Yoshinobu Uno.

*
This article has been updated to correct grammatical errors on October 28.