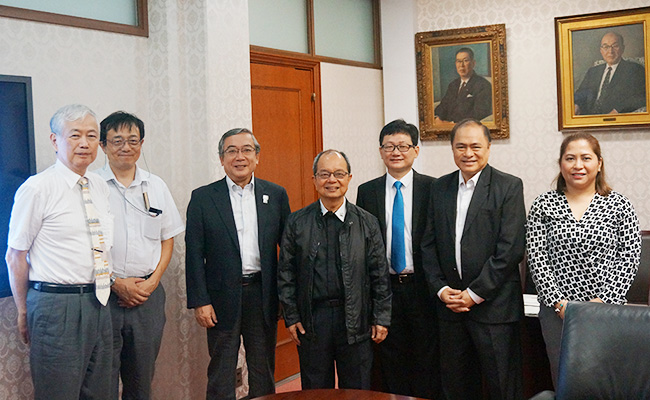 Since concluding a university-wide cooperation agreement in 1992, Tokyo Tech and DLSU have actively promoted research and student exchanges. Establishment of the Tokyo Tech Philippines Office on the Manilla campus of DLSU in 2005 further strengthened cooperation through academic exchanges and the implementation of workshops between Japan and the Philippines on an annual basis. In addition, Tokyo Tech High School of Science and Technology and DLSU Integrated School concluded a separate cooperation agreement in 2010 which has also supported joint activities. 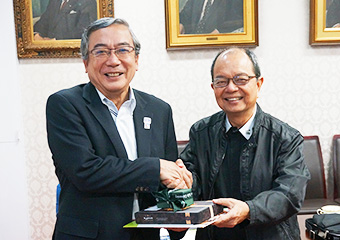 Mishima opened the meeting with a brief overview of Tokyo Tech. He highlighted the education reforms launched in April 2016 and current international cooperation activities. Suplido then explained DLSU's recent activities, including the Micro Hydro Project which introduced hydroelectric power into a village in the Province of Apayao, located in the northern Philippines, and ocean research conducted by the Br. Alfred Shields, FSC Marine Station, which focuses on marine resource assessment and evaluation of the coral reef conservation in the Philippines' coastal areas.

Takada sends students from his International Development Engineering lab to DLSU for fieldwork and other programs every year. In addition, as a former director of the Tokyo Tech Philippines Office and as former principal of the Tokyo Tech High School of Science and Technology, Otsuki was actively involved in promoting student and faculty exchange between the two institutions. The professors commented that cooperation activities with DLSU and DLSU Integrated School students have provided meaningful experiences for students from Tokyo Tech and its attached high school. Noting that students who have participated in the exchanges have benefited from the firsthand exposure to cultural differences and recognized the importance of being able to communicate in English, the Tokyo Tech professors expressed their appreciation to Suplido for DLSU's cooperation.

As the meeting concluded, the two presidents confirmed their intention to further strengthen the partnership between DLSU and Tokyo Tech.

De La Salle University is a Catholic coeducational institution founded in 1911 in Manila, the Philippines. DLSU has 36 departments in its Colleges of Business, Computer Studies, Education, Engineering, Law, Liberal Arts, Science, and School of Economics. Approximately 20,000 undergraduate and graduate students study in its three campuses located in Manilla, Cunlubang, and Bonifacio Global City in Taguig. DLSU is "committed to providing scholarship programs and improving the quality of life in Philippine society from the perspective of Christian ideals and values."