While metamorphic reactions in the subducting slab liberate large amounts of fluids, low-frequency earthquakes (LFE) largely occur beneath impermeable unmetamorphosed overlying plate, and are rare beneath metamorphosed plate. Scientists at Tokyo Institute of Technology and Tohoku University suggest that undrained conditions are a key factor in the generation of LFEs, whereas well-drained conditions reduce pore-fluid pressures at the megathrust and inhibit LFEs and associated tremors.

In the Nankai subduction zone, Japan, non-volcanic deep tremors occur down-dip of the megathrust seismogenic zone, and are observed to coincide temporally with short-term slow-slip events (SSEs). They occur within a limited depth range of 30 - 35 km over an along-strike length of ~700 km, associated with subduction of the Philippine Sea Plate. As Low-Frequency Earthquakes (LFEs) coincide spatially with tremor activity, the locations of LFEs act as a proxy for tremor activity. There are two distinct gaps in LFE activity at the Kii Gap and Ise Gap, while there is limited or no LFE activity beneath Kanto and Kyushu at the extensions of the LFE activity zone (Fig. 1). Junichi Nakajima from Tokyo Institute of Technology and Akira Hasegawa at Tohoku University examined the seismic properties of Nankai, including areas where LFEs are present and absent, in an effort to elucidate the factors controlling LFE generation.

The observed P-wave (dVp) and S-wave (dVs) velocities show the presence of low-velocity anomalies in the overlying plate at Kanto, Ise Gap, Kii Gap, and Kyushu, where there is limited or no LFE activity. LFEs do not occur on the megathrust where dVp and dVs are lower than approximately -4%, suggesting a systematic change in seismic velocities in the overlying plate between areas with and without LFE activity. There is a spatial correlation between LFE locations and seismic velocity, attenuation, and anisotropy anomalies. One hypothesis that could explain the variation in seismic properties along the LFE band is along-strike variation in the degree of prograde metamorphism above the megathrust that is proportional to the rate of fluid leakage from the subducting slab into the overlying plate. Notably, large amounts of fluid are liberated from the subducting crust at depths of 30 - 60 km.

The large number of crustal earthquakes in the Kii Gap and Ise Gap suggests that LFE activity and seismicity in the overlying plate are anti-correlated, largely reflecting the magnitude of fluid flux from the megathrust. The scientists concluded that a well-drained megathrust allows fluids to migrate into the overlying plate, inhibiting LFE activity at the megathrust, but facilitating shallow seismicity due to the decreased shear strength of crustal faults.

Figure 1. Map of low-frequency earthquake (LFE) activity above the megathrust in the Nankai subduction zone. LFE band is outlined in blue, while individual LFEs and active volcanoes are denoted by red dots and white triangles, respectively. Labels A-F mark locations of interest for LFE activity. Names of the regions discussed in the text are also shown. Broken lines denote depth contours of the upper surface of the Philippine Sea slab with an interval of 10 km. 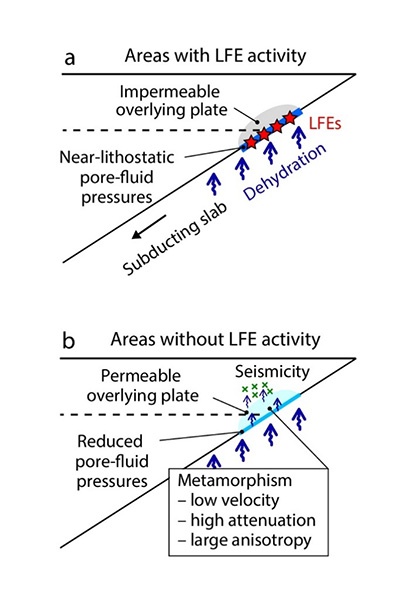