The Royal Institution of Great Britain (Ri) once again brought its famous Christmas Lectures to Japan and the Tokyo Tech Lecture Theatre in July 2016. Dr. Kevin Fong, an anesthesiologist, lecturer in physiology at University College London Hospital, and 2015 Ri lecturer with degrees in medicine, engineering, and astrophysics performed four times over the weekend of the 16th and 17th. 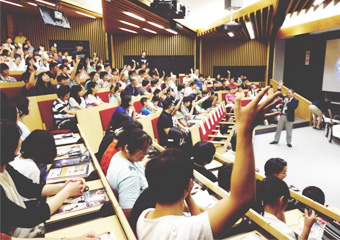 Most of the young audience volunteering to help

This year's lecture — How to Survive in Space — was centered around astronaut Tim Peake, the first Briton for more than 20 years to venture into space in December 2015, and his attempts to adjust to life aboard the International Space Station (ISS). The three original 2015 Christmas Lectures were compressed into one 90-minute session for Japanese audiences. Fong's mission was twofold — to help both children and adults understand what astronauts go through from launch to orbit, and to describe some of the complex needs of humans when in space. He began by showing footage of the Soyuz spacecraft bound for the ISS as it was being moved to its launch site. 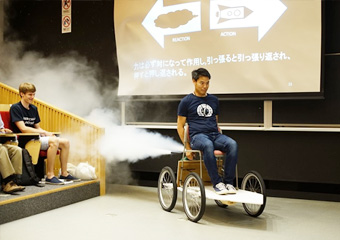 To introduce the theoretical core behind the energy required to reach the ISS, Fong explained — with the famous Principia in hand — that every action in nature has an equal and opposite reaction. To demonstrate Newton's third law, Fong sat on a cart and propelled himself forward by discharging CO2 from a fire extinguisher.

Spacecraft require more explosive energy provided by rocket fuel, so Fong then shed light on the three required components of combustion — flammable material, heat, and oxygen — with footage of a flame being applied to a liquid oxygen-soaked biscuit. He explained that launches from areas closer to the equator than the poles, and in the eastern direction, are best because the Earth's surface velocity provides a much-needed extra boost, and that rockets shed some components in mid-flight to lighten their load.

The second half of Fong's talk focused on the challenges that humans face when in space. Through various experiments, Fong explained the effects of low pressure and weightlessness on the human body, and the need to wear special space suits. To survive in a small, confined space on the ISS, astronauts need a sufficient supply of food, water, and oxygen. Water, for example, is recycled from urine using a special filter, a method which Fong demonstrated to the audience. 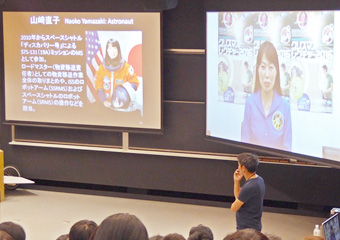 The lecture ended with a special video message from Japanese astronaut Naoko Yamazaki. “On a spacecraft there is no difference between up and down, so communication with colleagues requires phrases such as 'above you' and 'below you' to provide reference. Space work is not just about the crew, it is team work which involves technicians and many other people on Earth,” she emphasized. To conclude, Yamazaki expressed hope that by learning about the demanding yet fascinating nature of space through the Christmas Lecture, young members in the audience would be inspired to one day take over her work.

The special event came to a close with the audience joining Fong on stage to examine the experimental equipment, take group photos, and present the lecturer with a gamut of questions. The 2016 Christmas Lecture achieved again what these lectures have been doing for over 190 years — inspiring children.