On December 7, Honorary Professor Yoshinori Ohsumi of Tokyo Institute of Technology delivered his Nobel Lecture, entitled "Autophagy ? an Intracellular Recycling System." Many braved the cold of early-winter Stockholm to secure a place at the lecture venue, the Aula Medica hall of the Karolinska Institutet, and the theater was soon filled to capacity after the doors opened.

Following an opening address from Professor Maria Masucci of the Karolinska Institutet, Ohsumi took to the stage to deliver the roughly one-hour lecture to the eagerly waiting crowd. 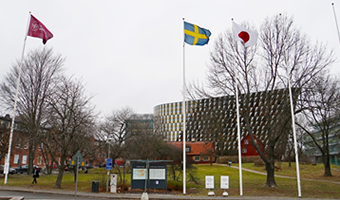 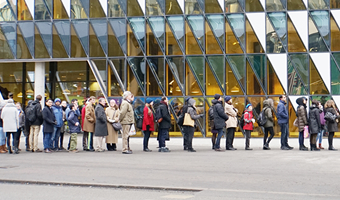 A queue outside the Aula Medica hall 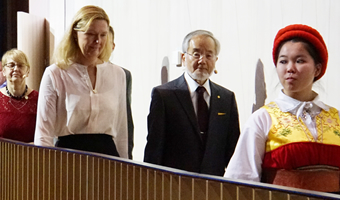 The Nobel Laureate arriving at the hall 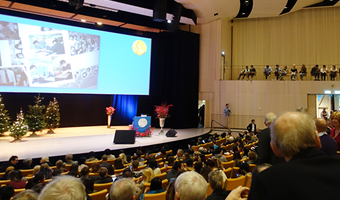 Drawing inspiration from nature during a tumultuous childhood

Ohsumi began his lecture by describing his early years in post-war Fukuoka, a period characterized by widespread poverty and malnutrition in Japan during which his mother contracted tuberculosis. However, his young years in rural Japan also afforded him unbridled contact with nature, which served to fuel his intellectual curiosity and inspired him to become a scientist. Following his admission to the University of Tokyo, Ohsumi ultimately decided to pursue a research career in the burgeoning field of molecular biology.

Next, Ohsumi briefly outlined the early years of his research career. His first taste of research was in the lab of Professor Kazutomo Imahori, where he studied the ribosome. This period made Ohsumi keenly aware of the continuous nature of protein synthesis in the cell. Upon completing his doctorate, his next move was to join the lab of Professor Gerald Edelman at the Rockefeller University in New York. It was here that he first encountered yeast, and he was immediately struck by its genetic tractability and utility as an experimental organism. Following his return to Japan in 1977, he joined the laboratory of Professor Yasuhiro Anraku, where he decided to tackle unanswered questions about the function of the vacuole in yeast. At the time, little was known about this organelle, and many assumed that it serves as little more than a dumping ground for unwanted cellular material. Ohsumi explained that he has never enjoyed competition, instead preferring to work in fields that do not attract much attention, making the yeast vacuole an obvious choice. Within several years, Ohsumi was able to demonstrate the transport of cellular components including amino acids, ions, and protons across the membrane of the vacuole for the first time. These results gave a strong indication that the vacuole plays roles in cellular physiology other than the passive collection of cellular material.

A unique idea leads to the identification of autophagy genes

At this point, Ohsumi reflected on the state of autophagy research when he entered the field. Autophagy was known as a pathway that allowed the degradation of cellular material by the vacuole since the 1960s, but the molecular mechanisms and physiological meaning of autophagy had remained unanswered for over twenty years. Beginning in 1988, Ohsumi developed a means of observing autophagy using standard light microscopy by genetically blocking the degradative function of the vacuole. Taking advantage of this unique approach, Ohsumi's group was able to identify nearly all of the genes essential for autophagy (ATG genes) in a very short period of time. Ohsumi then described the characteristic morphological features of autophagy using electron microscopy images while relating the excitement of this period of discovery.

Talking about his work on autophagy research

After this, Ohsumi described his lab's crucial role in the uncovering of the molecular mechanisms of autophagy. As many of the identified ATG genes were completely novel, the group initially made slow progress in describing the mechanistic function of the encoded Atg proteins. However, talented researchers intrigued by the professor's uncovering of a major new cellular phenomenon joined the lab, and their concerted efforts in yeast resulted in the detailed description of Atg protein functions. At the same time as this progress was realized, the group also made another major contribution to the field by revealing the broad conservation of autophagy mechanisms in mammalian and plant cells. This represented a revolutionary change in our understanding of degradation in cells and attracted the attention of researchers all over the world. Ohsumi noted the link between his group's basic research in yeast and ongoing disease research, taking the opportunity to thank researchers everywhere for their contributions to the field.

Ohsumi concluded the presentation by discussing his group's recent work on the physiological meaning of autophagy at Tokyo Tech. He noted that the group had returned to the original questions that inspired him to understand autophagy nearly 30 years earlier – what, where, how and why cellular components are degraded by autophagy. In noting the many questions that remain to be answered in yeast, Ohsumi emphasized the importance of basic research in achieving important scientific discoveries. He finally noted the continuous support of research grants in his work, invaluable colleagues, and loving family before receiving a standing ovation for his fascinating lecture. 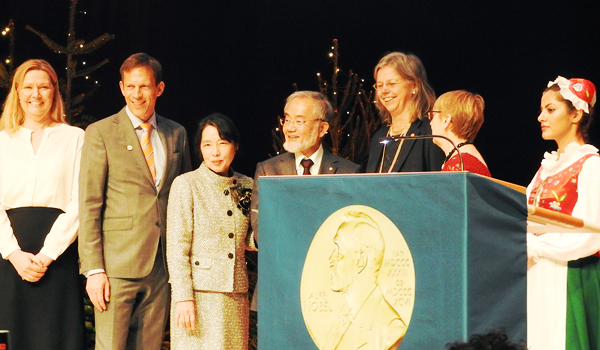 On stage with his wife and Nobel Foundation officials