On December 10 in Stockholm, Sweden, Honorary Professor Yoshinori Ohsumi attended the Nobel Prize Award Ceremony and Nobel Banquet. Associate Professor Hitoshi Nakatogawa, who also attended these events as a guest, sent us his report on the big day.

December 10, 2016 became a day to remember as I witnessed the awarding of the Nobel Prize in Physiology or Medicine to Honorary Professor Yoshinori Ohsumi in Stockholm, Sweden. The president of Tokyo Tech, Yoshinao Mishima, the director-general of the Institute of Innovative Research, Kazuya Masu, and myself were among the fourteen official guests of Ohsumi who were invited to attend the Nobel Prize Award Ceremony and Banquet, held on the anniversary of Alfred Nobel's death.

At a reception with Ohsumi (fourth from right) and his friends

The dress code for both the ceremony and banquet was white tie and tails, and we had arranged our attire to be hired from a local tailor called Hans Allde. A few days earlier, we visited the tailor for a fitting where we shared a laugh, saying that this is the first and probably the last time we would wear such elaborate attire. Once donned though, the costume certainly did put us in the mood for the occasion. On the big day, it snowed. Dusk was already falling at three in the afternoon when limousines turned up at the Grand Hôtel, the lodging of the Nobel laureates and their guests. Ohsumi and his wife were transported to the venue of the award ceremony in one of the limos, and we followed shortly after by coach. 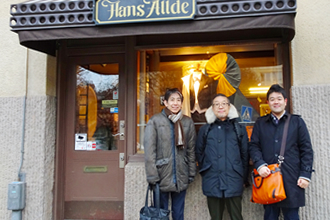 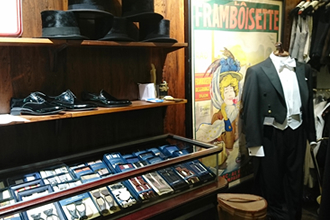 The interior of Hans Allde

Limousine sent by the Nobel Foundation

Stage of the Stockholm Concert Hall

The Nobel Prize Award Ceremony was held at the Stockholm Concert Hall. After showing our invitation cards and identification at the entrance, we made our way to our seats on the third balcony. The stage, lined with deep blue carpeting, came into view. On it was an arrangement of blue chairs for seating previous laureates, Nobel judges, and members of the Prize Awarding Institutions. At the very front were red chairs for this year's laureates on the left, and gilded armchairs for the Swedish royals on the right. The gallery at the rear of the stage was occupied by an orchestra, above which rose a magnificent pipe organ with Swedish and Norwegian flags hanging ornately at its center. The atmosphere was majestic, and I took a moment to relax and enjoy the grandeur of the event. Ohsumi's family was seated on the first floor on the right, in the third row. I could see Mrs. Ohsumi, looking elegant in a kimono, with her two sons.

Noble laureates seated on the stage, Ohsumi third from right

A little after 4:15 p.m., when all the guests had taken their seats on the stage, the ceremony began. The assembly rose to their feet. Sweden's royal family entered onto the stage, and then, accompanied by orchestral music, a procession of this year's Nobel laureates came into view. Ohsumi was wearing his Cultural Medal with his white tie. It was deeply moving to see the ever friendly and familiar figure take center stage at this grand event, and to fully grasp the fact that he was about to be awarded the Nobel Prize. 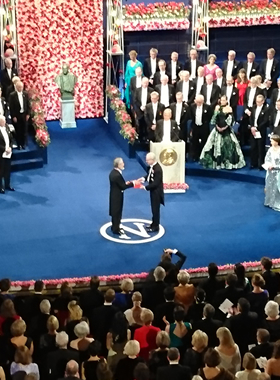 Ohsumi accepting a medal and diploma from the King of Sweden

The ceremony progressed, accompanied by dignified music performed by the orchestra. After the opening address by the chairman of the board of the Nobel Foundation, it was time to present the prizes. The Nobel Prize in Physics was presented first, followed by Chemistry and then Physiology or Medicine, which Ohsumi had won. Before each award came a speech in Swedish, given by a Nobel Committee member of the relevant field, who described the reasons for presenting the award. We were all provided with an English translation of the Swedish text. For the presentation of the Nobel Prize for Physiology or Medicine, Professor Nils-Goran Larsson of the Karolinska Institutet began his speech by talking about how the Stockholm Concert Hall had maintained its magnificence through daily repair and maintenance work ever since its inauguration in 1926. He suggested that this was, in a way, analogous to autophagy, the process involved in maintaining cellular homeostasis, and went on to describe Ohsumi's achievements in detail. At the end of his delivery, he called on the professor to step forward to accept the Nobel Prize. We rose to our feet and watched as Ohsumi accepted a medal and diploma from King Carl XVI Gustaf of Sweden. Numerous prestigious awards have been presented to Ohsumi over the years, and I have had the fortune of attending some of those awards ceremonies, but this was of an entirely different order — this really was the pinnacle of recognition for a scientist.

The presentation of the Nobel Prize for Literature was conducted in the absence of the singer and songwriter Bob Dylan, the first ever musician to receive the literary award. Patti Smith attended the award on his behalf and performed a moving rendition of one of his songs. There was a touching moment when the attendees showered Patti Smith with a warm applause after she stumbled midway. Finally, after the presentation of the Prize in Economic Sciences, the ceremony drew to a close, once again guided by the orchestral music that resonated across the hall. 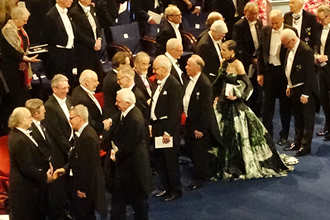 Laureates being congratulated by the Nobel Committee after the ceremony

After the ceremony, we hurried to catch a bus to Stockholm City Hall where the banquet took place. After presenting our passports again for identification, we entered a magnificent, rectangular red-brick hall with dinner tables for 1,300 guests. When I was wondering how to find my seat, I was given a small, 66-page brochure containing the seating plan with guest names. 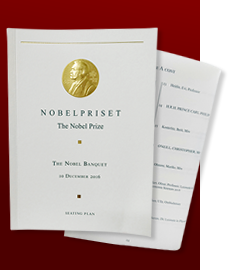 There was a long stairway to the second floor on which a hallway extended along the wall from the end of the stairway to another room. Members of the royal family and the Nobel laureates emerged, came down the hallway, and were seated at the longest table in the center of the hall. We were seated along with other guests in a group of ten, away from the central table.

In addition to the ceremony itself, the banquet proceeded with music performed by an orchestra and choir. The menu consisted of an appetizer, main dish, and dessert — all beautifully presented and delicious. The accompanying drinks started with champagne, then red wine, and concluded with dessert wine. After dinner, we also had a chance to try cognac and Swedish punsch, a fresh-smelling sweet liqueur. It was also impressive to see the well-coordinated service provided by the waitstaff who efficiently set and cleared tables for the large number of guests. 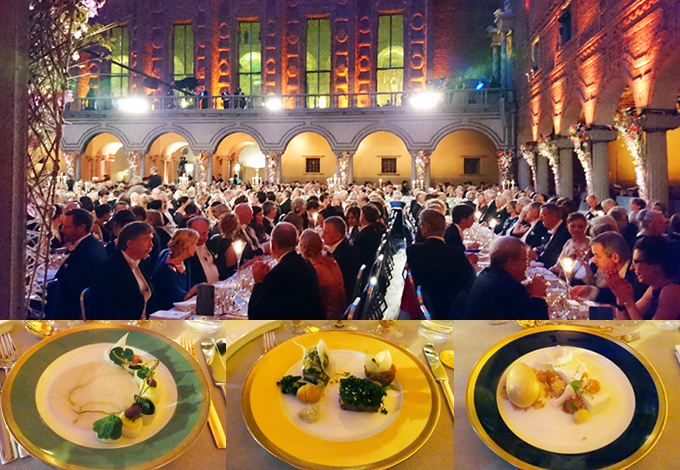 After the meal, each laureate (or a representative in the case of multiple recipients) gave a speech. All explained the background of their research, interspersed with humor, and thanked those who supported them. Ohsumi first extended his gratitude to the Karolinska Institutet and the Nobel Foundation, then congratulated the other laureates. He said he'd been conducting research for about 40 years by studying yeast, a living organism that produces not only his research results but also his favorite alcoholic drinks — something for which he was also very thankful. Ripples of laughter filled the hall. 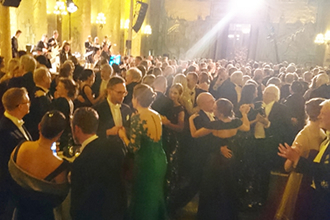 The banquet concluded when the members of the royal family and the Nobel laureates returned to the second-floor room. A dance was then held in another large room on the second floor called the Golden Hall. I took a quick peek inside and saw guests enjoying the music and dancing enthusiastically. However, we were more drawn to the Nobel medals and commendation certificates displayed in showcase at the edge of the room. Seeing them, I was once again moved by the fact that Ohsumi had won a Nobel Prize.

Thanks to Professor Ohsumi, we had an experience not shared by many in everyday life. As guests, we were able to relax and fully enjoy the prestigious event, but the professor seemed to be very tired. He was expected to attend another banquet the following day at the royal palace before returning to Japan. His life may not be the same after going back, but I hope he can return to a life in which he can devote himself to his beloved studies. 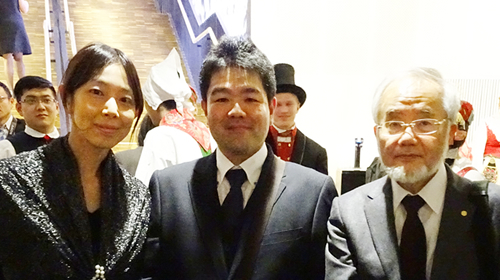 At the post-lecture reception with Ohsumi (right) and Dr.Machiko Nakatogawa