Tokyo Tech hosted the Science and Technology in Society (STS) forum* 2016 University Presidents' Lunch Meeting at the Kyoto International Conference Center on October 3. Organized annually, the lunch meeting aims to provide opportunities for leaders of higher education institutions to exchange views on topics in science, technology, and higher education, and to deepen their understanding of the various challenges faced by universities around the world. 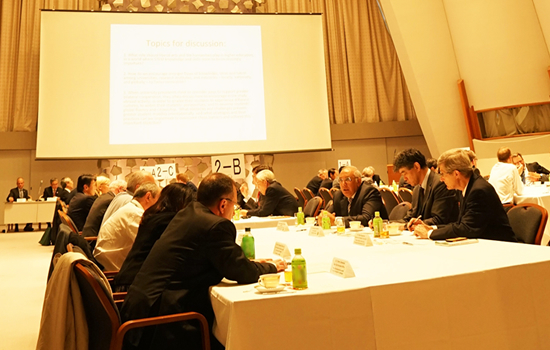 Small-group discussions at each table 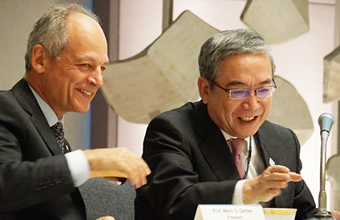 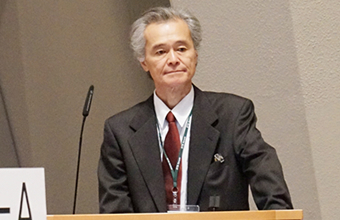 This year's meeting kicked off with a special greeting by Mr. Koji Omi, founder and chairman of the STS forum and former Member of the House of Representatives of Japan. Omi explained that the STS forum aims to support networking between international leaders in fields including education, business, and politics. He hoped leaders of higher education institutions would utilize the lunch meeting in particular to expand their networks and through these links, contribute to the betterment of the world.

A total of 50 higher education leaders attended the lunch meeting, which was organized around small-group discussions on set topics. The 2016 meeting focused on

Participants in each group actively discussed their table's assigned topic, addressing the roles of universities in today's world, sharing their own experiences, and reflecting on challenges.

In the latter half of the meeting, each table shared a summary of their discussion. Co-chairs Gertler and Mishima then provided final remarks.

Gertler commented that the meeting highlighted a common theme, which was the recognized importance of liberal arts and the humanities in enriching teaching and research in other disciplines, including so-called STEM disciplines, and the necessity of multidisciplinarity in teaching and research. He noted that “global connections” was also a keyword that came up in the discussions of all three topics. Participants described the growing importance of both enhanced connections among universities as well as domestic and international connections between universities and industries to promote student mobility, research partnerships, and academic exchange between institutions in different countries.

Mishima explained that some of the topics discussed during the meeting had been recognized as important priorities in the 5th Japan Science and Technology Basic Plan issued by the Japanese Government in April, and were also discussed at the recent 7th EU-Japan Science Policy Forum. Picking up on the theme of the role of liberal arts in higher education, Mishima commented that well-designed curricula in the liberal arts, including humanities and social science, are necessary to foster researchers whose broad perspectives, flexible mindsets, and creativity enable their utilization of the specialized knowledge that will lead to innovations. He also mentioned that providing students and young researchers with funding for research is necessary in order to encourage their mobility and broaden their experiences.

Drawing the meeting to a close, Mishima and Gertler expressed their appreciation to the other presidents for participating, and looked forward to continuing the discussions in similar events in the future.

*
STS forum (The Science and Technology in Society forum)
The STS forum aims to provide a new mechanism for open discussions on an informal basis and to build a human network to resolve the new types of problems stemming from the application of science and technology. Nearly 1,200 global leaders in various fields including science and technology, education, politics, business, and the media from nearly 100 countries, regions, and international organizations participated in 2016. The forum has been held annually in Kyoto each fall since 2004.