Institute for Liberal Arts (ILA) Professor Taro Yamazaki held the fifth and final public lecture in the "Cosmology of Wagner's The Ring of the Nibelung" series on November 16, examining the last part of the German composer's masterpiece with a lecture entitled "Twilight of the Gods – The Doom-Salvation Paradox." 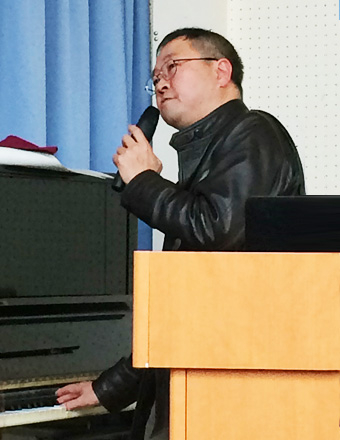 Yamazaki demonstrating the diminished fifth tritone, or the "Devil in music (diabolus in musica)," which was used by Wagner to represent the character of Hagen

Despite the unexpected snowfall in central Tokyo, many members of the public who had attended the previous lectures were again present, ready for another exciting plunge into Wagner's mind with the guidance of Yamazaki.

Yamazaki began by explaining that the "Twilight of the Gods" is a futuristic piece of work with plenty of relevance to today's world. In the story, Siegfried moves back and forth between the kingdom of the Gibichungs and Brünnhilde's rock, and amid these worlds of different dimensions, feels uncertainty as he can no longer tell right from wrong. Yamazaki explained that this was a reflection of modern times, where human nature is alienated by science, capitalism, and other developments in civilization.

Nature is destroyed, absolute norms are lost, and our "inner soul" screams for help. Together with the accompanying music, the twists and distortions in Wagner's story unconsciously disturb not only the characters but also the consciousness of the audience.

Yamazaki continued with the story. Hagen, considered an incarnation of hatred, conspires to alter the fate of Siegfried and Brünnhilde, who are in love. Hagen orchestrates Siegfried's betrayal of Brünnhilde, turning her love into a frightening fury. Again, Wagner portrays this fury with the help of powerful music, sending a chilling unease at the audience. 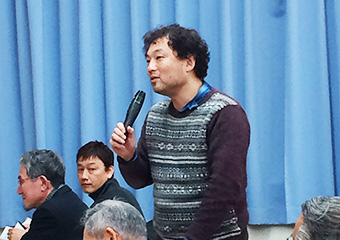 "A rare lecture even at music universities," commented tenor Jun Takahashi, who will play the role of Mime in a 2017 production of The Rhinegold, the first part of Wagner's tetralogy

Hagen's lack of self-love is the result of constant ideas of hatred planted in him by his father. This hate towards the world and darkness of the soul is something Yamazaki compared to Dostoyevsky's Brothers Karamazov. Wagner spectacularly expressed this pollution of the world by Hagen's hatred with dark, gloomy music laced with overlapping leitmotifs*.

*A short, constantly recurring musical phrase to express a person, ideal, or situation in opera or program music. Also known as a "leading motif," or "guiding motif," Wagner first used this technique in his music dramas.

Hagen kills Siegfried as part of his conspiracy, injecting into the audience a feeling of lost hope. Wagner places great weight on the meaning to the word "hope." Siegfried's Funeral March, a brilliant piece of music supplementing the drama at this stage, magnifies the existence of salvation as a result of the constant quest for a good future, a component that Wagner has skillfully implanted amidst the misery of reality, Yamazaki explained.

The story culminates in the self-sacrifice of Brunnhilde, the burning and collapse of the hall of the Gibichungs, and the flooding of the Rhine River, suggesting the world's potential return to nothingness. The last scene of the DVD introduced by Yamazaki, however, shows Brünnhilde holding a newborn child, leaving the audience with hope for new life. 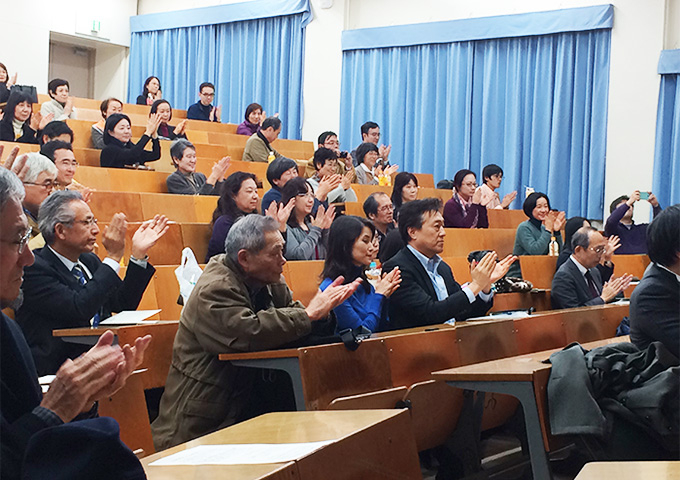 Round of applause from the audience

After a thundering round of applause at the end of the last lecture, members of the audience commented, "I was pleasantly surprised to find this kind of lecture at Tokyo Tech, it was extremely interesting." "I sincerely hope that Tokyo Tech continues providing opportunities like this."

With Professor Yamazaki's knowledge, choice of words, and the "music" of his smooth voice, the five-lecture series he provided allowed the audience to experience the diversity and ambiguity of Wagner's world through a very unique interpretation.

Wilhelm Richard Wagner (1813-1883), a German composer whose operas and music had a monumental influence on the course of Western music, spent 26 years writing the libretto and music for his masterpiece tetralogy, Der Ring des Nibelungen, known as The Ring of the Nibelung in English. The epic music drama consists of four components intended to be performed in series:

A full performance of all the components, collectively known as the Ring cycle, takes place over four nights at the opera, with a total playing time of about 15 hours.