The smoking gun of the giant impact on Pluto

Researchers revealed that the dark and reddish elongated regions along Pluto's equator were formed by the Charon-forming giant impact.

Researchers revealed that the dark and reddish whale-shaped region—named "Cthulhu Regio"—observed by NASA's New Horizons spacecraft (Figures 1 and 2) is the smoking gun of a giant impact on Pluto. Associate Professor Yasuhito Sekine (University of Tokyo) conducted heating experiments of water solutions containing simple organic molecules, and found that the color of the solution becomes dark and reddish after heating at > 50 ℃ for several months (Figure 3), which is similar to the color observed in Cthulhu Regio. Specially Appointed Associate Professor Hidenori Genda (Earth-Life Science Institute, Tokyo Institute of Technology) carried out many simulations of a giant impact on Pluto, and found that the giant impact that created the satellite Charon can also heat the wide regions near Pluto's equator up to > 50 ℃ (Figure 4). Thus, they concluded that Cthulhu Regio was formed by the Charon-forming giant impact, which also suggests that giant impact events are more ubiquitous across our solar system than previously thought. 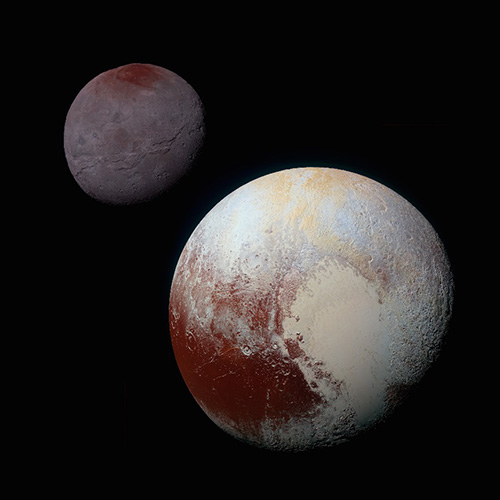 Figure 1. Color images of Pluto (lower right) and Charon (upper left) taken by NASA's New Horizons spacecraft (image from NASA/APL). The dark and reddish "Cthulhu Regio" can be seen at the bottom left of Pluto. 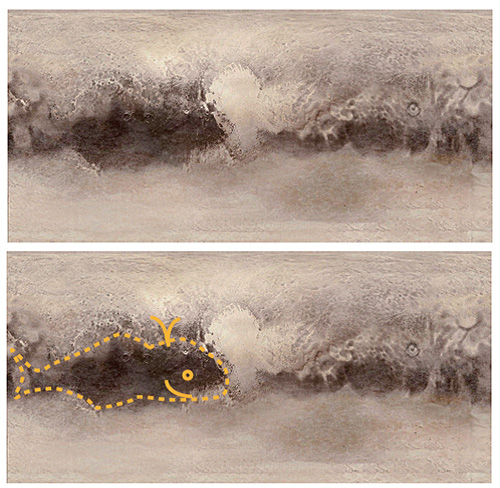 Figure 3. Visible transmittance spectra (left) and visual appearance (right) of solutions during heating. The solution containing formaldehyde and ammonia was heated at a temperature of 50 ℃ for 4 months. Although the starting solution is colorless and transparent, the color of the solution becomes dark and reddish owing to the synthesis of complex organic materials. 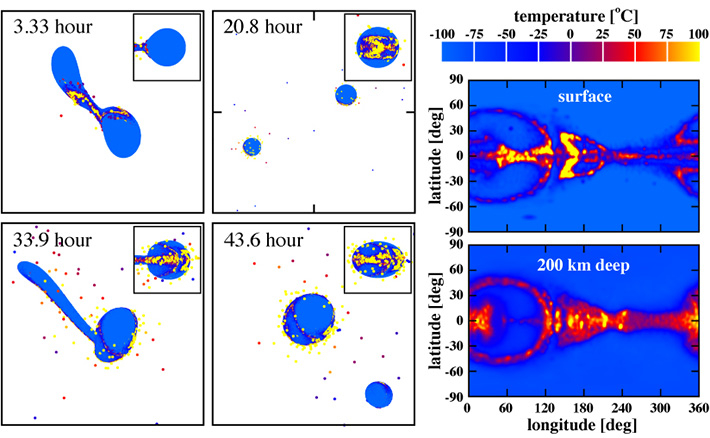 Figure 4. An example of numerical simulations for the Charon-forming giant impact. The impactor-to-target mass ratio was 0.35, impact velocity was about 1 km/s, and impact angle was 60 degrees. The four panels on the left are snapshots of the formation process for a Charon-sized satellite. The two panels on the right are Mercator projection maps of the temperature distributions of post-impact Pluto at the surface and 200 km deep. In this impact condition, a Charon-sized satellite can be formed and the regions near Pluto's equator are widely and extensively heated up to more than 50 ℃.

Pluto is a dwarf planet with a diameter of 2,400 km orbiting in the Kuiper belt, a ring of bodies beyond Neptune. Since Pluto is about thirty times farther from the sun than we are, it was seen as but a tiny point of light with all huge telescopes. Thus, Pluto was a mysterious object and the last unexplored frontier in our solar system. In August 2015 after a 9-year voyage, NASA's New Horizons spacecraft flew past Pluto, and sent us amazing images of it. Many researchers had imagined that Pluto was a deadly boring icy body, but it was revealed to have a wide variety of geological features such as a heart-shaped fresh basin, heavily cratered old regions, and icy volcanos (Figure 1). The most eye-catching feature is the dark and reddish whale-shaped region called "Cthulhu Regio", which lies on Pluto's equator (Figure 2). Spectroscopic data by the spacecraft indicates the existence of a mixture of water ice and dark high polymer organic matters in this region. Since Cthulhu Regio is so huge (3,000 km long and 300 km wide), the most large-scale physical and chemical process should have been involved in its formation. However, the formation process has been a mystery since this region was found.

Researchers focused on the formation process of Charon, which is a huge satellite (12% of Pluto's mass or about half Pluto's size) orbiting Pluto. As one of the hypotheses for the origin of Charon, the giant impact hypothesis has been proposed as an analog to the formation of our huge satellite Moon. Researchers examined the possibility that the Charon-forming giant impact can also create the elongated dark and reddish region like Cthulhu Regio near Pluto's equator.

Associate Professor Yasuhito SEKINE (University of Tokyo) prepared water solutions containing simple organic compounds that are typically found in comets (and should therefore be contained in Pluto), such as formaldehyde and ammonia. Then he conducted heating experiments of these water solutions, and found that the color changed from colorless and transparent to dark and reddish (Figure 3) owing to the synthesis of complex organic materials after heating at > 50 ℃ for several months. The visible and near infrared spectra of these heated solutions resemble those of Pluto's dark equatorial regions.

Specially Appointed Associate Professor Hidenori GENDA (Earth-Life Science Institute, Tokyo Institute of Technology) carried out 180 simulations of giant impacts on Pluto by using the TSUBAME supercomputer, and found that the Charon-forming giant impact can create a huge (~ 3,000 km long and ~ 300 km wide) and hot (> 50 ℃) water pool near Pluto's equator in most cases (Figure 4). Since this hot water pool cools down over a period of more than 1000 years, the synthesis of complex organic materials proceeds efficiently and these regions should turn dark and reddish.

From the heating experiments and numerical simulations, the researchers concluded that the dark and reddish whale-shaped region observed by the New Horizons spacecraft is the first material evidence of a giant impact on Pluto. They also pointed out that the wide variety of observed surface colors among Kuiper belt objects, such as Makemake, Sedona, and Eris, can be explained by the stochasticity of giant impact events with different impact conditions. Giant impact events are more ubiquitous than previously thought from the innermost sections of our solar system (terrestrial planet region) to its most distant fringe (Kuiper belt region).