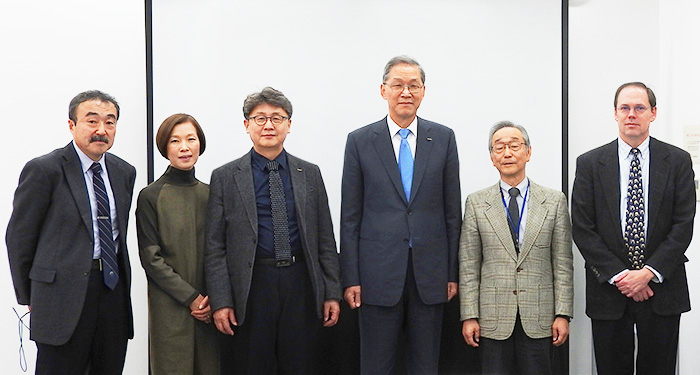 Based on a university-wide cooperation agreement concluded in 2003, Tokyo Tech regularly conducts student and researcher exchanges with the Korean university. The visit by the delegation was aimed to introduce recent activities at POSTECH, to discuss further promotion of student and researcher exchanges, and to learn more about Tokyo Tech's Massive Open Online Courses (MOOCs), which were launched in 2015.

Okada opened the meeting with a brief overview of Tokyo Tech. He highlighted the education reforms launched in April 2016, in which undergraduate and graduate schools were joined as Schools, and curricula were revised to provide greater continuity as students transition from bachelor's to master's and master's to doctoral programs. Okada explained that the liberal arts curriculum, which was previously offered only at the undergraduate level, was expanded to provide coursework right through the doctoral programs.

Answering a question by President Kim about this emphasis on the liberal arts, Okada explained that the Institute wants all of its students to acquire the skills and knowledge required of leaders, and to understand the importance of their roles in society. By offering courses in philosophy, the social sciences, and foreign languages, among others, Tokyo Tech encourages its students to develop critical thinking, communication, and social skills in addition to advanced scientific and technological knowledge. 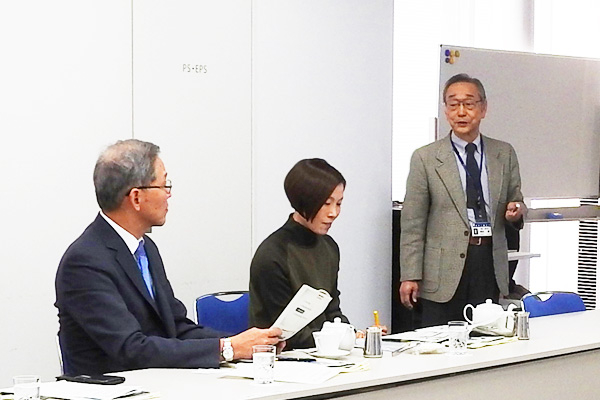 Following Okada's remarks, Cross described Tokyo Tech's activities developing MOOCs. Having joined edX, the MIT- and Harvard-founded online learning consortium in 2014, the Institute, as TokyoTechX, is offering two MOOCs in earth science and modern Japanese architecture. The courses have so far garnered an enrollment of 17,000 students, and two more courses are in development by the Online Education Development Office (OEDO) in cooperation with faculty and students.

President Kim then gave an overview of POSTECH, which celebrated its 30th anniversary in 2016. Established as the first research-oriented university in Korea, POSTECH has been highly evaluated both nationally and internationally, and approximately 3,500 students study at its campus in Pohang. The University is home to more than 70 research institutes, including the Pohang Accelerator Laboratory (PAL), home to the nation's only 3rd and 4th generation light sources.

Park, the director of international relations, shared an update on student exchange programs at the university, and President Kim stated that POSTECH would like to promote further cooperation with Tokyo Tech through the programs.

After the meeting with the executive vice presidents, the POSTECH group met with School of Engineering Professor Hiroshi Yamaura and Institute of Innovative Research (IIR) Associate Professor Joon-wan Kim, a POSTECH alumnus, to further discuss promotion of student exchanges between the two universities. The visit concluded with a tour, guided by Institute Professor Shigehisa Hirose, of the Tokyo Tech Museum and Centennial Hall.