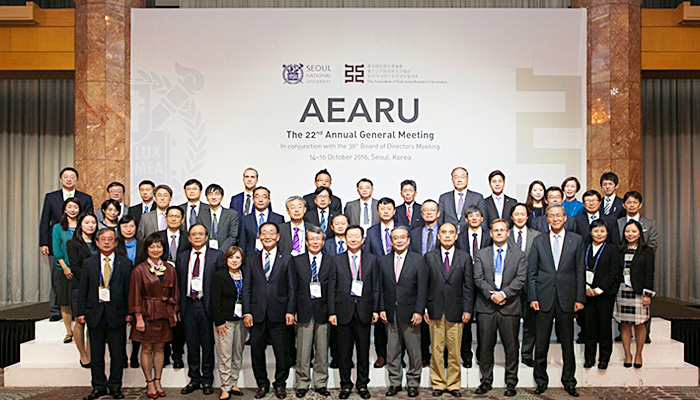 Established in 1996 to provide a forum for exchange between East Asia's leading research-oriented universities, AEARU is comprised of 18 member universities from Japan, China, Korea, Hong Kong, and Taiwan.

The AEARU Annual General Meeting (AGM), which is scheduled to coincide with the autumn BOD, was attended by 49 participants from the member universities.

Proposals for AEARU activities scheduled for 2017 were introduced and approved at the board meeting. President Mishima confirmed that the next AEARU BOD will be held at Tokyo Tech on April 14 and 15, 2017.

At the AGM held subsequent to the BOD, member universities reported on AEARU activities conducted in 2016. Vice President Sekiguchi updated participants on the outcome of the 6th Energy and Environmental Workshop organized by Tokyo Tech on August 26 and 27, commenting that the workshop successfully brought together more than 30 researchers and students to share the latest research in solar cell technologies.

Later in the meeting, Times Higher Education World University Rankings Editor Phil Baty gave a talk on the analysis behind the rankings for 2016-2017, and representatives from the member universities made presentations highlighting recent education and research activities on their campuses.