Scientists at Tokyo Institute of Technology have observed almost purely circularly polarized electroluminescence from GaAs-based spin-polarized light-emitting diodes at room temperature, with no external magnetic field. This behavior indicates the presence of spin-dependent nonlinear processes, which may allow the development of semiconductor-based spin-photonic devices in the future. 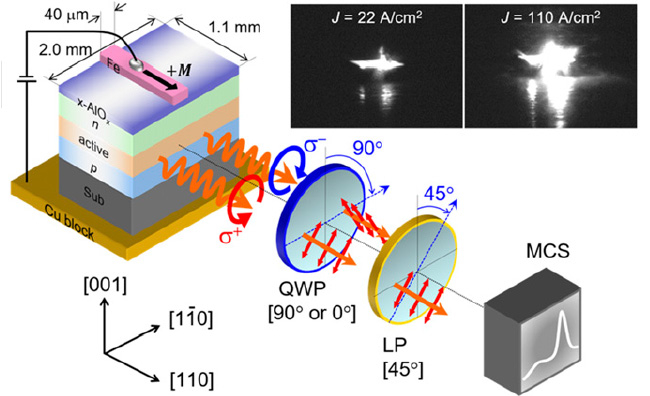 The field of spintronics focuses on spin transport behavior in magnetic metals, and the major findings in this area have important implications for the field of electronics. This is because conventional electronics primarily considers the electron charge, whereas spintronics allows the electron spin to be exploited. One of the most significant advancements in spintronics has been the introduction of spin degrees of freedom to semiconductors, which are essential components of modern electronic and photonic applications. However, most experiments investigating spin manipulation in semiconductors have been performed under high magnetic fields and at cryogenic temperatures.

The LEDs used in the study contained an epitaxial double heterostructure (sandwich-like structure) of AlGaAs/GaAs/AlGaAs, a crystalline γ-like AlOx tunnel barrier (for electrical stability during operation), and a polycrystalline Fe in-plane spin injector. During operation, spins of a given type were injected into the device. Spin relaxation then caused these spins to disperse and adopt other orthogonal orientations. Radiative recombination subsequently occurred, which was observed in the form of a linearly polarized emission.

Experiments on the LED chips showed that a higher current density generated an increase in the emission intensity. Nishizawa and coworkers also noted that the difference between the left- and right-handed EL components increased with the current density. Specifically, the intensity of the left-handed minority component decreased with increased current density, whereas that of the right-handed majority component increased linearly. Therefore, when the current density was sufficiently high (~100 A/cm2), almost pure CP was achieved. Investigating this behavior in more detail, the researchers found that p-type doping in the active layer allowed the CP observation, which arose from spin-dependent nonlinear processes occurring at a sufficiently high current density.

In the future, higher current densities will be applied in order to elucidate the mechanism behind these nonlinear processes and to investigate the possibility of stimulated CP emission in other geometries. Other important avenues of investigation also exist, e.g., potential spin-LED applications in secure optical communications, cancer diagnosis, and optically enhanced nuclei imaging.

Figure 3. Linearly polarized of light
The electric field componentof the light oscillates
on a given plane.