Geophysicists at the Earth-Life Science Institute (ELSI) at the Tokyo Institute of Technology report in Nature Geophysics (online February 27, 2017) a new model for the existence of a deep mantle conveyor belt system that may have operated inside the Earth since its formation about 4.5 billion years ago. 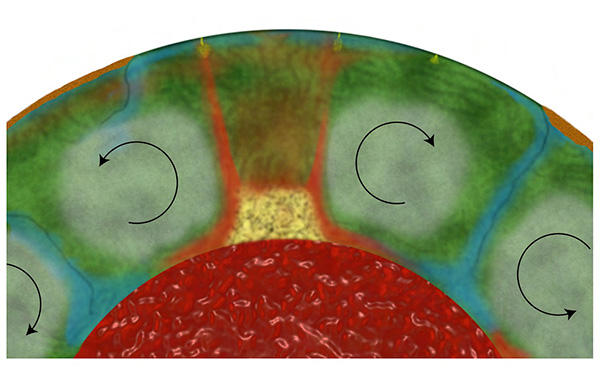 Most earthquakes, volcanoes, mountain building, sea-floor spreading, and other major geological activities on Earth are driven by so called plate tectonics, where large sections of the Earth's crust move as coherent blocks — or plates — that crash together, pull apart, slide on top of each other, and pass one another at their boundaries. Beneath the plates lies the 3,000 km thick rocky mantle, composed of hot pliable rock that slowly deforms and churns under the immense pressures and temperatures of the deep interior. This churning motion, or mantle convection, acts to remove heat from the Earth's interior, similar to the circulation in a slowly boiling pot of stew. Mantle convection ultimately drives the motion of tectonic plates. In turn, the plates also stir the mantle, where they are subducted because of sliding on top of each other, and sink through the mantle to great depths.

Scientists have long wondered whether the Earth's mantle is well mixed by this stirring and the churning convective motions (mantle convection), or if the lower part of the mantle is different in composition than the upper part. That some plates are subducted to the very base of the mantle, travelling 3,000 km in about 200 million years, has been traditionally taken as evidence for a well-stirred and mixed mantle stew.

In this research, the scientists took a new approach by considering whether the chemical composition of mantle rocks affects the churning convective motion. Some rocks deform and flow more readily than others, behaving like water as opposed to high viscosity liquids such as honey. For example, pouring water into a pot of stew results in the water mixing with the stew even without much stirring. Needless to say, it would take much more time for honey to mix with stew. Notably, if dumplings are put into stew, then both components will never mix. Even though dumplings are generally deformable; the boiling stew just flows around the dumplings because it is much more deformable, or less viscous, than dumplings.

Now, in the Earth, lower mantle-rocks behave more like stew than dumplings (or more like water than honey) depending on their chemical composition. If rocks in the lower mantle are relatively enriched in silica (or SiO2, which is also the main component of sand), they are more viscous and behave more like dumplings compared to silica-depleted rocks, which are weaker and behave more like the stew itself. This is intriguing because many meteorites that are considered the building blocks of Earth have a higher silica content than rocks in the upper part of Earth's mantle. To make up the balance of silica-depletion in most mantle rocks that have been probed, at least some rocks in the lower mantle should be relatively silica-rich. So, the Earth's mantle might be a bit like a well-mixed, silica-depleted stew with some poorly-mixed silica-rich dumplings near its base.

To study the churning motion of the mantle stew, Maxim Ballmer and his colleagues at ELSI added a strong silica-rich layer into numerical simulations of mantle convection. They found that, after a major overturn of the initially imposed layering, the mantle became organized into large roll-like convection cells, where weak silica-depleted rocks fill the upper mantle and circulate around strong silica-rich blocks in the lower mantle along a giant conveyor belt (Fig.1).

Giant blocks of ancient rocks hidden beneath Africa and the Pacific?

In the simulations, this pattern of churning convection remained stable for many billions of years, and longer than the age of the Earth. The strong silica-rich blocks in the lower mantle are probably more than 1,000 km in diameter and 10,000s km long, making up approximately 15% of the mantle's mass. Ballmer and his colleagues think that they are hidden far below Africa and the Pacific, shaped like giant sausages or donuts.

The existence of such strong domains can explain why some of the subducted plates do not sink toward the base of the mantle, but rather pond at intermediate depths, where they encounter the strong sausages or donuts. The long-term stability of these domains can further account for the geochemical diversity of deep-sourced lavas at the Earth's surface. While some lavas are related to melting of mantle rocks that have been recycled from the near-surface crust and circulated through the mantle, others trace evidence of ancient domains that have avoided circulation and recycling since the earliest days of our planet.

The survival of ancient rocks in the convicting mantle has been a long-standing puzzle to many scientists, but may now be resolved as a consequence of inefficient mixing between strong silica-enriched rocks and the much weaker silica-depleted mantle.