Scientists at Tokyo Tech and RIKEN Center for Advanced Photonics have introduced an optical detection technique for compact electronic terahertz (THz)-wave sources. By incorporating a resonant tunneling diode (RTD), a wavelength from a THz wave can be converted to a near-infrared (NIR) wave that can be detected using a commercial photodetector. The scientists report this technique will open up new opportunities in THz-wave applications. 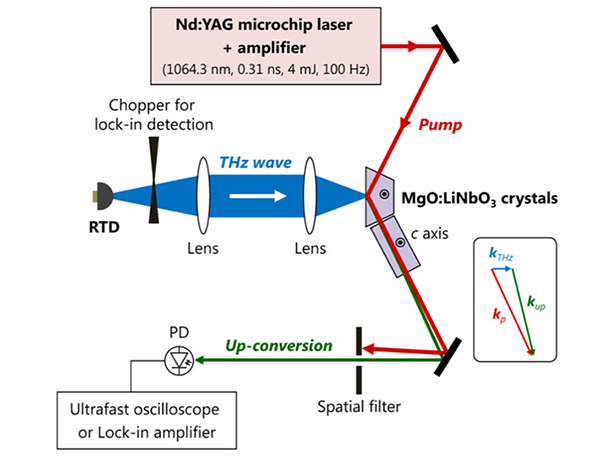 Over the past several decades, a variety of terahertz (THz)-wave sources and detectors have been studied for electronics and photonics applications. Potential uses of THz waves include nondestructive imaging and wireless communications.

In order to implement these applications, the detection of THz-wave radiation from compact sources at room temperature is crucial. To accomplish this goal, the resonant tunneling diode (RTD) can be used. The RTD is an extremely compact THz-wave source that operates in the THz-wave frequency region.

To convert a wavelength from a THz wave to a near-infrared (NIR) wave, a group of scientists led by Dr. Yuma Takida from RIKEN implemented an upconversion process using a MgO:LiNbO3 crystal under noncollinear phase-matching conditions.

After the upconversion process was completed, the scientists demonstrated the nonlinear optical detection of THz-wave radiation by using continuous-wave (CW) resonant RTDs at 0.58, 0.78, and 1.14 THz that were designed and fabricated by a group led by Prof. Masahiro Asada and Associate Prof. Safumi Suzuki from Tokyo Tech. A minimum detection limit of CW THz-wave power was achieved as low as 5 nW at 1.14 THz. This corresponds to 2- aJ energy and 2.7 × 103 photons within a time window of a 0.31- ns pump pulse.

This detection technique can function as a dispersive THz-wave spectrometer and does not require additional dispersive elements. This technique can be applied to real-time spectroscopic detection with multifrequency THz-wave sources. The noncollinear phase-matching realizes simultaneous upconversion from superposed THz waves to spatially distributed NIR waves.

The scientists also showed that the input frequency and power of RTD devices can be calibrated by measuring the output wavelength and energy, respectively, of the upconverted waves. A comparison of the detection performance between CW RTD devices and a pulsed is-TPG indicates that this approach can be applied to other THz-wave sources.