Mrs. Anita Lehikoinen, Permanent Secretary of the Ministry of Education and Culture of Finland, led a seven-member education and research delegation to Tokyo Tech on January 24. The group met with President Yoshinao Mishima, Executive Vice President Makoto Ando, and Professor Junichi Iijima of the School of Engineering. 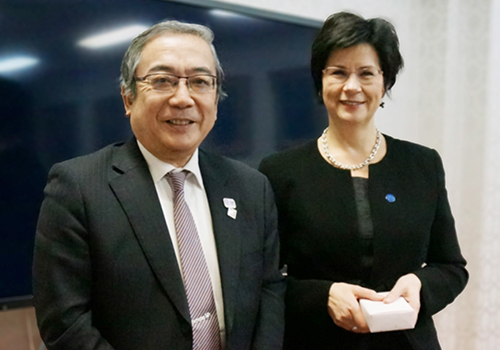 The delegation visited Tokyo Tech to learn more about the Institute's education and research strategies. During the meeting, the two sides discussed issues such as the funding of higher education in Japan and Finland and the need for universities to connect their research to industry and society.

Mishima shared a brief overview of Tokyo Tech in which he highlighted Tokyo Tech's education reforms, research policy, and cooperation with industry. Lehikoinen and other delegation members expressed interest in Tokyo Tech's Schools and the Institute of Innovative Research, which together form the pillars of the Institute's April 2016 education and research reforms. 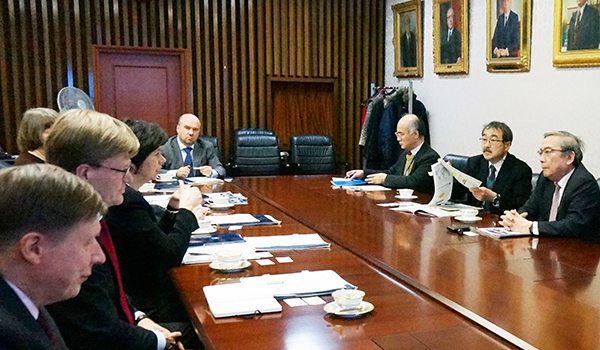 Lehikoinen explained that her ministry is working toward the next generation in science and technology against a backdrop of social and economic changes. She and members of the delegation were particularly interested in how Tokyo Tech is approaching challenges — such as funding and diversification of funding sources, increased emphasis on performance and output, and debates on the role of universities in society — similar to those faced by Finnish universities.

As one example, Mishima described Tokyo Tech's platform for engaging industry and society. Lehikoinen commented that Tokyo Tech's efforts to enhance connections on an organizational level and to secure solid research income "really resonate with what we're thinking in Finland."

Prior to their meeting with the Tokyo Tech president, the Finnish delegation met with Professor Hideto Nakajima of the Institute for Liberal Arts and discussed Nakajima's research on the history of science and technology.