Takeru Hirano, a member of the Tokyo Tech student club Jug Tech, won first place at the championships of the Japan Juggling Festival 2016, held from October 8 to 10 at the National Olympics Memorial Youth Center. A first-year master's student in Computer Science at the time, Hirano teamed up with a student from another university to win the Team Division with an impressive devilstick* performance.

*
The devilstick is one of many objects manipulated by members of Jug Tech. Others include diabolos, cigar boxes, hoops, cones, clubs, and traditional balls and beanbags.

Juggling, the manipulation of objects such as balls and sticks, is often associated with street performers and circuses. The activity has recently gained popularity among sports lovers, and regular competitions are held. The Japan Juggling Festival, sponsored by the Japan Juggling Association, is the biggest event of its kind in the country. The annual festival brings together beginner, amateur, and professional jugglers from all over Japan to enjoy the performance art, improve their skills, and just get to know one another. The actual championships include two categories — individual (male/female) and team (two or more performers) — during which competitors perform a routine within a set time and are scored based on skill and originality. 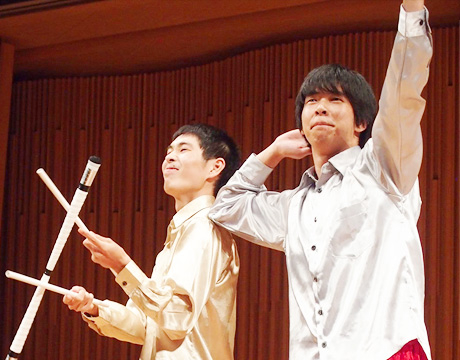 I have been working hard for the past year with my teammate, and I am very happy we won. I was not only able to perform on the stage I had been longing for, but was also able to meet some performers who I have great respect for, so it was very motivating. I share this massive victory with those who have supported me until now. I hope this result further boosts the activities of Jug Tech. Thank you very much.

Jug Tech is the student-run juggling club at Tokyo Tech. Members can be seen improving their skills on campus every day, and they also borrow the gymnasium of a nearby elementary school for indoor practice every Friday. Jug Tech is famous for its stage and street performances at the Tokyo Tech Festival, and also carries out workshops and performances at local kindergartens, elementary schools, and festivals.