The Tokyo Tech student-run class, aimed at youngsters with no prior programming experience, teaches the basics of code in a group work setting. This year, a total of 39 middle and high school students created a simple game using a programming language called Processing. 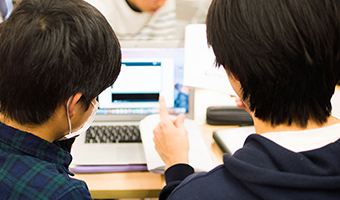 Interactive session between student and mentor

As an icebreaker, groups of four participants and two traP mentors each were given activities by members of Robogals Tokyo, the Tokyo Tech branch of an international student club promoting STEM skills among female students. After getting to know each other, participants then began writing the actual source code under the guidance of their Tokyo Tech mentors.

Once the framework of the game had been completed, the participants gave suggestions on additional functions they would like to see, and discussed how these improvements could be realized. There was a chance to test out the final product at the end of the session, which prompted further discussion regarding how certain functions can be achieved.

traP began as an unofficial student club in April 2015. With a focus on game programming, the club also focuses on the creation of digital content, and shares its knowledge through various public engagement activities.