Tokyo Tech Professor Emeritus Masahiro Mori, the founder of Robocon1 and a global pioneer in robotics, has appeared on a special CNN series entitled "The Future of Japan." 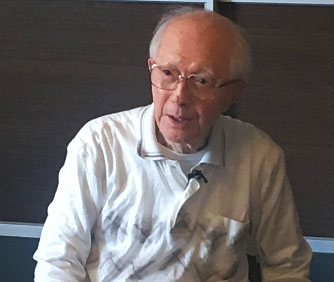 The CNN interview was conducted in Miyazaki City, where Mori lives. Despite being 90 years old, he made full use of a computer, videos, and a whiteboard when speaking about the history and future of robotics.

"As robots begin to look more and more like humans, they also began to feel more familiar. However, when they become too anthropomorphic, at a certain point, they begin to make us uncomfortable and we don't want to even look at them. I call this the ‘uncanny valley.' I don't know why such feelings occur. A robot like ASIMO2 avoids the uncanny valley by not having a human-like face," Mori explains.

"About 30 years ago when I began studying robots, I gathered members of the laboratory to discuss what robots should be like in the future. Prototypes for all current robots such as drones and postal delivery robots came up as ideas. Current robot research is an extension of this. Japan's robotics is leading the world, and the main reason is that the robot is not regarded as an enemy of humans, but is viewed as a friend. From my perspective as a Buddhist scholar, ethics is extremely important for future robotics research. Therefore, it is important to not just pursue progress and worldly desires, and not to be swayed by the outside environment. It is essential to temporarily stop walking, quiet the mind, control and bring it to a natural state."

A special CNN series "The Future of Japan"

Title : The weird and wonderful world of Japanese robots 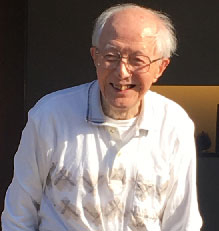 Mori was appointed as professor in the Department of Control Engineering at Tokyo Institute of Technology in 1969. He retired in 1987. Based on his technical and philosophical perspective, he was able to attain tremendous achievements in the field of robotics. In 1970, he published his now-famous essay on the "uncanny valley" phenomenon. At EXPO Okinawa held in 1975, he exhibited the "three-eyed beetles," seven robots moving autonomously in groups using only C-Mos logic circuits. He began research on bipedal walking robots in his laboratory in 1971, developing one with flexible knees together with a control theory. This required not only various technologies but also a creative viewpoint and philosophy on locomotion. This was further developed by one of his disciples, Toru Takenaka, into the famous ASIMO at Honda R&D Co., Ltd.

Robot contest - Contest with roots at Tokyo Tech. The robot contest for Japan's technical colleges, which celebrates its 30th anniversary in 2017, has been televised by the Japan Broadcasting Corporation since 1988. The Robocon International Design Contest, which began two years later, originated from a collaboration between Tokyo Tech and Massachusetts Institute of Technology.

The first full-scale bipedal walking robot, developed by Honda Motor Co., Ltd. and now manufactured by Honda Engineering Co., Ltd. An abbreviation of Advanced Step in Innovative Mobility, ASIMO is a humanoid robot intended for practical use in an environment where it coexists with people.