The Broadcasting Culture Award was established in 1949 and is awarded every year to those who contribute to the development of the broadcasting industry and to the improvement of broadcasting culture. This fiscal year, Ando and five other contributors received the award at a presentation ceremony held on March 17 at NHK Hall in Tokyo, Japan. 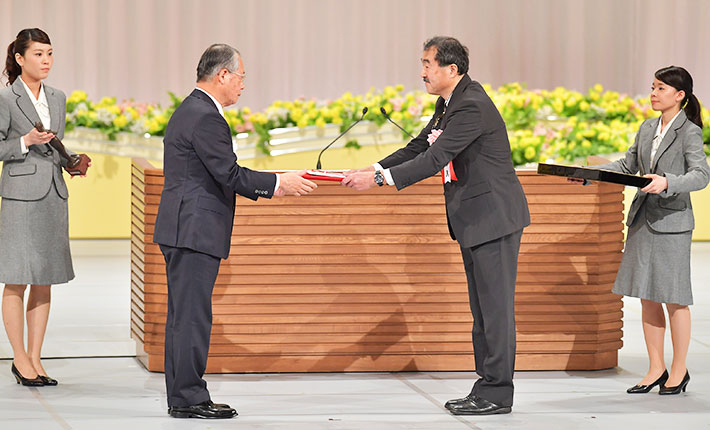 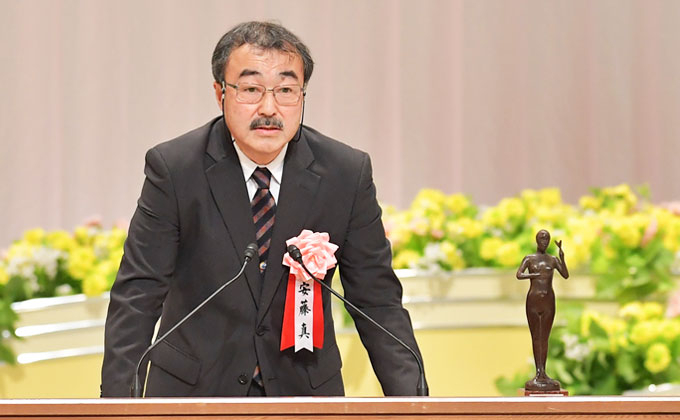 I would like to thank those who nominated me for this historical award and those who selected me. Although I am studying radio waves and antennas, I will speak mainly about satellite broadcasting today due to the nature of this award.

I completed graduate school in 1979. The experimental broadcasting satellite Yuri had been launched the previous year. Three years later, I returned to Tokyo Tech and participated in research on planar waveguide slot antennas invented by Professor Naohisa Goto, who had been my mentor at the Institute and was performing research with grants from the Hoso Bunka Foundation. Two years after that, satellite broadcasting began through Yuri No. 2. It was the world’s first direct satellite broadcast service.

Today, satellite broadcasts cover all of Japan, even remote islands 36,000 km away using only hundreds of watts. From the perspective of receivers, systems now receive radio waves with an extremely high-gain antenna with a sensitivity over 100 times higher than in the past. Also, allowing radio waves to spread and cause interference in neighboring countries is prohibited, so it was a great challenge for those who designed the antenna. Since then, I have been studying planar antennas. The lightweight, 90-cm circular honeycomb antennas weighing less than 1 kg mounted on the AKATSUKI probe, which recently achieved a successful swing-by, are traveling towards Venus. Those on HAYABUSA 2, which is heading for Mars, are the same type of radial line slot antennas designed in our laboratory with Associate Professor Jiro Hirokawa and other students, and were developed jointly with NT-Space1). We designed the electrical model and tested the electrical characteristics of the flight model in the laboratory. We are anxiously anticipating the arrival of these probes at their destination planets soon and waiting for data to be sent back to Earth using these antennas.

Regarding satellite broadcasting, I have worked with people from the NHK Science & Technology Research Laboratories on several occasions. Actually, one year before the world's first satellite broadcast service began using Yuri No. 2a, the transmitter of the first broadcast satellite failed. I believe that this world’s first failure was as, or even more valuable than a success would have been. I would like to pay tribute to the “challenge everything” attitude and courage of the people at the NHK Science & Technology Research Laboratories who are leading the development of unexplored technologies. Direct satellite broadcasting, emergency warning systems, and hi-vision: these three technologies, which were initiated by NHK, have been acknowledged internationally as historically great achievements in electricity and electronics, and have been certified as IEEE Milestones2.

I would also like to mention the close relationship between Tokyo Institute of Technology and broadcasting. Professor Hidetsugu Yagi, who later served as the president of the Institute, is famous for his home TV antenna known as the Yagi Antenna, which was invented while he was at Tohoku University. Professor Kenjiro Takayanagi, who graduated from the Institute, went on to invent the world's first electronic television receiver at Shizuoka University. The temperature-insensitive quartz oscillation plate, which is an essential technology for communication and broadcasting, was invented by Professor Issac Koga (Issaku Koga) of the Institute. All of these too are certified IEEE Milestones. In this way, seniors of the Institute have been active in research related to various broadcasting technologies. I learned that Professor Takayanagi and Professor Koga have also received this same Broadcasting Culture Award, so it is truly a great honor for me to accept this.

Tokyo Institute of Technology has undergone major reforms in education and research since April of last year. Although it is a science and engineering university, faculty members of the Institute for Liberal Arts have become increasing important, and a curriculum was started so that all students can become more familiar with the fields of ethics, philosophy, literature, and the arts throughout their education. In recent years, the importance of science and technology in solving various problems has increased, and its influence has also extended to humans and the environment. Therefore, our aim is to foster scientists and engineers who are full of humanity. Even now, I am receiving this award together with people from various fields that I see on television and hear on the radio. Again, I am made aware of the collaboration between technology and culture, and I am deeply moved.

Lastly, I would like to extend my sincere gratitude to all the seniors, colleagues, and students at the laboratories who are engaged in research, as well as the people inside and outside the Institute who support my research on a daily basis.

A system by the IEEE (Institute of Electrical and Electronics Engineers, Inc.), the world's largest academic association in the field of electricity and electronics, that certifies historical achievements that made significant contributions to the advancement of society and industry more than 25 years after development.