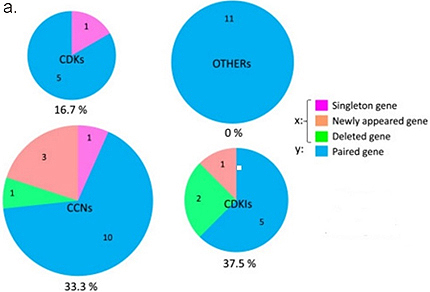 Figure a.Genes involved in the regulation of the cell cycle. The numbers of singleton, new, deleted, and paired genes and percentages of altered genes are indicated in the charts. 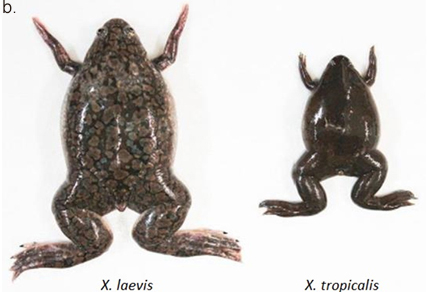 In their growth and development, all living organisms go through the cell cycle which is controlled by a triad of cyclin-dependent kinases (CDKs), cyclins, and CDK inhibitors (CDKIs). The genes coding for these cell cycle regulators are highly evolutionarily conserved among eukaryotes, and, therefore, can be studied using model organisms.

Dr. Toshiaki Tanaka from Tokyo Institute of Technology and his colleagues examined the evolutionary relationship among CDKs, cyclins, and CDKIs in African clawed frogs Xenopus laevis. X. laevis is an interesting species for genetic research because it is allotetraploid, i.e., contains two genomes (L and S) derived from two diploid progenitors 18 million years ago.

Each ancestral genome present in African clawed frogs originally had a set of cell cycle-regulating genes, and the scientists found that the majority of the principal genes for cell division promoters, CDKs and cyclins, were retained as homeologous copies at a higher rate compared to other genes (Figure).

Although CDKIs must be conserved among many species from fishes to mammals, the scientists were surprised to discover exceptions in African clawed frogs. Thus, two CDKI genes, CDKn1c and CDKn2a, were deleted in both L and S chromosomes in their genome, which can lead to diseases including cancers in humans. Especially, the gene locus coding for CDKn2a includes another gene, ARF, which also has an important role as a tumor suppressor. The loss of CDKn2a gene loci in L and S chromosomes indicates not only CDKn2a but also ARF are lost in their genome, which often results in cancers in mammals. Furthermore, alterations were found in remaining CDKI genes, such as CDKNx genes, which varied in size in chromosomes 7L and 7S, while their coding sequences differed from that of the homeologous gene in Western clawed frog X. tropicalis. Besides, CDKn2c gene copy in S and L chromosomes were differentially expressed because of variations in a conserved noncoding region, which seems to include enhancer sequences. In spite of exceptional evolutionary fragility of the CDKI-encoding genes in African clawed frogs, it is reported that cancers are not frequent in them compared to mammalian models, suggesting that factors other than CDKI may downregulate cell division and suppress cancers in these species.

The results obtained by Tanaka et al. suggest that one of the candidates is cycling-activating kinase (CAK). CAK consists of CDK7 and its binding partner cyclin H, which are encoded by singletone genes in the African clawed frogs genome, respectively (Figure). Since CAK is critical for cell cycle progression as it activates all other CDKs, the loss of gene copies may potentially slow cell proliferation, and suppress cancers. Also, the fragility of important genes in allotetraploidy may account for the evolutionary appearance of novel genes with unique functions.