Liposomes have been used as a material in many common products such as capsules for drug delivery and cosmetics. However, the membrane is fragile, leading to problems such as collapse of liposomes by slight stimulus, causing the entrapped compounds to easily leak. To improve the function of liposome as a capsule, it has been needed to develop a method that can toughen liposomes and control their strength.

In order to increase the strength of liposomes, Miho Yanagisawa at Tokyo University of Agriculture and Technology, Masahiro Takinoue at Tokyo Institute of Technology(Tokyo Tech), and their colleagues developed a network structure of DNA that supported membranes similar to a cytoskeleton in living cells using DNA nanotechnology (Figure 1A). The DNA strands used in this study bind to each other and create a network structure by decreasing temperature (Figure 1B). Also, since DNA has negative electric charge, using the attractive force between DNA and the inner layer of liposome with positive charge, they succeeded in forming a DNA cytoskeleton that directly supported the liposome membrane as backing. Liposomes are generally easy to collapse even when a slight osmotic pressure was applied to liposomes. In contrast, liposomes with the DNA cytoskeleton they developed were tolerant of an osmotic pressure even when the applied osmotic pressure was comparable to that assumed to be applied in our body (Figure 2). This reinforcement function is derived from the network structure of DNA; also, there is an advantage that the strength of the DNA cytoskeleton can be control by the DNA base sequence design. In addition, since the artificial cytoskeleton is formed using DNA, it is expected to impart various functions such as induction of membrane collapse based on DNA chemical reactions for controlled release of entrapped compounds. 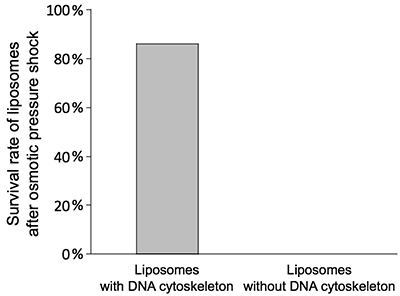 This research results are published on the online version of Proceedings of the National Academy of Sciences of the United States of America on June 26, 2017.

An artificial lipid bilayer membrane vesicle mainly composed of lipids. It is used in various fields such as modeling of cell membranes, drug delivery, and cosmetics.

A technology to create nanometer-sized (1/1,000,000th of a millimeter) structures in a controlled manner by utilizing the nature of double helix formation of DNA. In this study, the network structure created by DNA was produced and utilized for the construction of an artificial cytoskeleton.