Having concluded a university-wide cooperation agreement in 2010, Tokyo Tech and HKUST have promoted research and student exchanges through a variety of activities organized by international consortia, including ASPIRE League1, AEARU2, and AOTULE3.

This meeting was intended as an opportunity to exchange more detailed information to further deepen the bilateral partnership. The HKUST delegates expressed interest in exploring research collaborations with Tokyo Tech in cross-disciplinary areas and in creating a dual degree program, and the two sides considered utilization of the existing student exchange programs offered by each university to promote bilateral student exchanges. Attendees also discussed the two universities' respective policies and strategies with regard to internationalization and research.

Following the meeting, Tokyo Tech deans and faculty members met with the HKUST delegates to discuss in detail the possibilities for cooperation between counterparts at each School.

In parallel to the deans' meetings, Chan gave a lecture on "HKUST, Rising Asia and Global Impact" to a large audience comprised of members of the Tokyo Tech community and the general public. 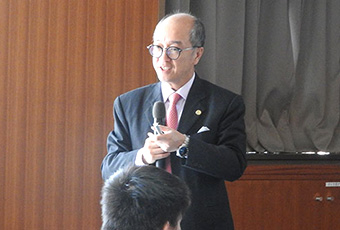 President Chan talking to the audience

Chan discussed the transformation of higher education in Asia in the past several decades and described how governmental strategies regarding science and technology have led to the shift of global innovation to Asia. He referred to significant increases in R&D spending and in the numbers of scientific papers, patent applications, and start-up companies from the region.

Furthermore, Chan described the Hong Kong government's strategies in regards to higher education, technology, and innovation, including the establishment of HKUST in 1991, and introduced opportunities for international students and researchers at the university.

Chan and members of his delegation were in Japan to attend the AEARU Board of Directors Meeting hosted by Tokyo Tech on April 15. During the BOD meeting, the delegation visited research facilities and met with Tokyo Tech researchers and students.

Founded in 2009 at the suggestion of Tokyo Tech, ASPIRE League also includes HKUST, Korea Advanced Institute of Science and Technology, Nanyang Technological University, and Tsinghua University. The consortium contributes to the realization of a sustainable world through the advancement of science and technology and the development of human resources. It aims to form a hub for innovation in Asia.

Founded in 1996 at the suggestion of HKUST, AEARU was established as a forum for discussion among the presidents of leading research-oriented universities in East Asia with the goal of promoting exchange and cooperation activities between the 18 leading universities in China, Hong Kong, Japan, Korea, and Taiwan. Tokyo Tech is a member of AEARU's Board of Directors for 2016 and 2017.

Founded in 2007, AOTULE is a consortium of 13 premier engineering universities in the Asia-Oceania region. It aims to broaden students' perspectives through education, research, and cross-cultural interactions.