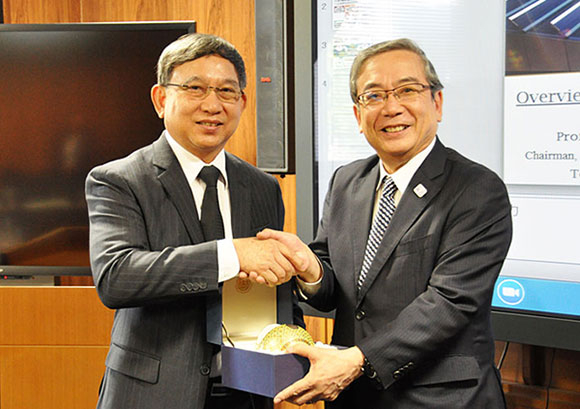 The delegation's visit was for exploring further cooperation in the field of higher education. Prajin explained his government's interest in collaborating with Tokyo Tech in the areas of science, technology, computing, and IT as a means to advance the nation's development strategy emphasizing technology and innovation.

Cooperation between Tokyo Tech and Thailand dates back 30 years. Following collaborative research activities launched under a program by the Japan Society for the Promotion of Science (JSPS), Tokyo Tech concluded the first of its cooperation agreements with Thai university partners in 1985. In 2002, Tokyo Tech launched a distance-learning pilot project utilizing satellite links to transmit lectures to the National Science and Technology Development Agency (NSTDA) and Thai universities. The same year, it established Tokyo Tech's first overseas office on the grounds of NSTDA.

The latest Institute supercomputer TSUBAME 3.0*, scheduled to be launched in summer 2017, was also a topic of interest. It is widely anticipated to be the top supercomputer in Japan in supporting AI capabilities. Responding to questions, Professor Satoshi Matsuoka of the Global Science and Information Center (GSIC) mentioned that Thai scientists and researchers have been using Tokyo Tech supercomputers for research simulations.

Delegates also inquired about Tokyo Tech's industrial collaborations in Thailand. Executive Vice President Maruyama explained that though cooperation has thus far centered on educational activities with NSTDA and Thai universities, Tokyo Tech would like to enhance collaboration, especially in research, with its Thai partners while expanding academia-industry collaboration in the country.

The visit marked the 130th anniversary of Japan-Thailand diplomatic relations. 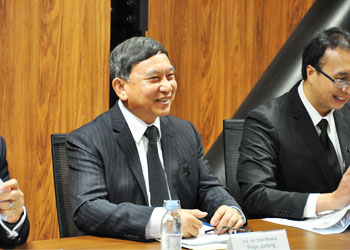