A new data analysis technique, moving subtrajectory analysis, designed by researchers at Tokyo Institute of Technology, defines the dynamics and kinetics of key molecules in the immune response to an infection. These biophysical descriptions are expected to clarify the TCR microcluster, an essential assembly for a T cell to initiate its attack on a pathogen.

To kill a pathogen invading the human body, T cells, or lymphocytes, bind to it through T cell receptors (TCR). One of the first events this binding initiates is the formation of a microcluster that includes tens or hundreds of TCR molecules. These microclusters are deemed essential to initiate and sustain the immune signal. A new analysis technique by scientists at School of Life Sciences at Tokyo Institute of Technology provides a quantitative description of the molecules that form these microclusters. The study can be read in Scientific Reports.

"Imaging technologies have visualized the generation and dynamics of microclusters, but there is no quantitative data. We developed ‘moving subtrajectory (MST) analysis' using single-molecule tracking to quantitatively study the dynamics and kinetics of CD3 and CD45 around the microcluster," explains Prof. Makio Tokunaga, whose lab designed the new method.

TCR function by forming a complex (TCR/CD3) with CD3. CD45, on the other hand, is not part of the complex, but is believed to regulate the formation of the cluster.

Single molecule imaging was used to trace the movement of CD3 and CD45 around the microclusters. Yuma Ito, an Assistant Professor in the lab, shows that MST analysis is superior to standard analysis methods by revealing details on the temporal and spatial variation of the movement.

"The appearance of nanoclusters gives us a new understanding of the dynamics of microclusters. The dynamics and kinetics at the single molecule level is very important for defining the molecular mechanisms of biological functions. Along with the new development of biopharmaceuticals related to immune control, elucidation of the mechanism of T cell activation is becoming more important in clinical application. Detailed quantitative data will assist in manufacturing biopharmaceuticals with stronger effects on the immune system," says Tokugawa.

While the paper demonstrates the application of MST analysis to TCR microclusters, the quantitative tool is applicable to any cellular complex that depends on spatiotemporal dynamics, let alone those of the immune system. 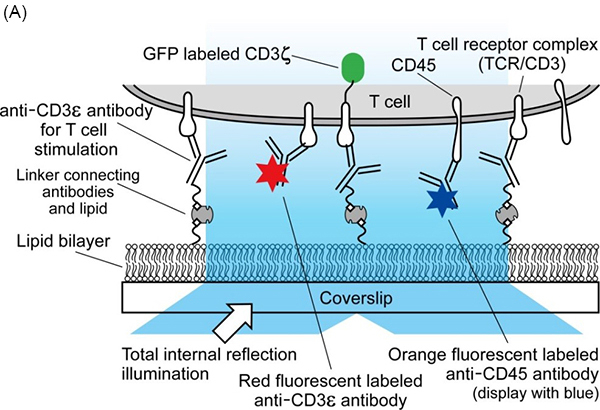