Scientists at Tokyo Institute of Technology (Tokyo Tech) achieved precise and fully reversible switching of the polarity of voltage produced by the thermoelectric effect across a gold junction with an atomic-scale contact. The control of thermoelectric voltage was achieved by mechanically elongating the contact. This technology is expected to find applications in thermopower generation, measurement techniques in materials science, and solid-state electronic devices. 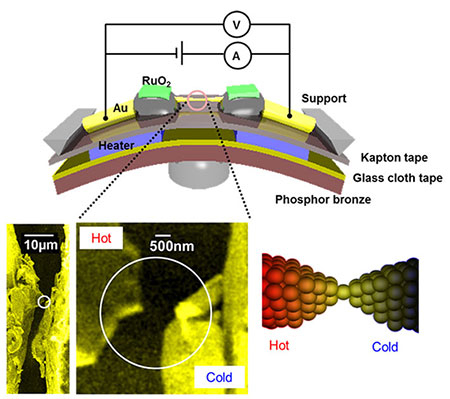 Schematic view of the experimental setup. The inset shows microscopic images of the contact after it is broken by elongation.

A voltage difference is created across a junction of two wires held at different temperatures. This phenomenon, called thermoelectric effect, has been widely studied and used in various applications such as thermoelectric power generators, thermoelectric refrigerators, and temperature measurement. When the cross section of the junction contact is reduced to a few atoms, quantum-mechanical effects or, specifically, quantum interferences among electrons affect the transport of electrons across the junction. These interferences are strongly dependent on the structure, including minute defects, of the atomic-scale contact and surrounding material, which determine electrical properties such as conductance and thermoelectric voltage. So far, quantum interference effect in atomic-scale metal contacts has not found much application, because of the difficulty in precisely controlling atomic structures.

Akira Aiba, Manabu Kiguchi and their colleagues at Tokyo Tech experimentally demonstrated that the magnitude and sign of the thermoelectric voltage across atomic-scale gold junctions can be controlled by applying a mechanical strain to deform the contact minutely and accurately while the structure of the surrounding material remains unaffected. Minute deformations were performed through bending of the junction's substrate by using a piezoelectric transducer and by maintaining a low-temperature environment so that the atoms do not gain sufficient kinetic energy to vibrate strongly and cause random deformations of the structure. As the contact was elongated, the conductance decreased in a step-wise manner, and the thermoelectric voltage varied sharply with changes in sign. Remarkably, these changes were perfectly reversible: the electrical properties were restored to their initial values when the contact was compressed back to its initial structure.

A suitable range of elongation that causes a step-like change in conductance with a change in sign of the thermoelectric voltage was used to create a voltage switch, i.e., a device that switches voltage when elongated or compressed. Such a change of sign of thermoelectric voltage across atom-scale metal junctions was observed previously, but this is the first time that the sign change could be controlled predictably and reversibly.

Interestingly, the voltage switch developed by these scientists was shown to work reliably over at least 20 cycles of elongation and compression.

Figure 2. Demonstration of the atomic-scale gold junction as a voltage switch.

Control of thermoelectric voltage (VT) and conductance (G) with the periodic variation of elongation of the contact (D). The elongations in (a) and (b) were 0.73 nm and 0.10 nm with temperature differences of 10 K and 4.4 K, respectively.

Further, the scientists theoretically proved that the switching is caused by the change of quantum-interference states of electrons due to the mechanical modification of the structure of the contact. A theoretical model of the junction that the scientists constructed using density functional theory accurately predicted the changes of electrical properties with varying deformation.

This is the first report of successful manipulation of quantum interference of electrons in metal nanostructures through external mechanical force. The results of this study can have potential applications in thermopower generation, measurement techniques in materials science, and solid-state electronic devices.