Three members of the Tokyo Institute of Technology Advertisement and Media Art Society (TITAMAS) took part in the Imagine Cup World Finals 2017 on July 24 and 25. Shunsuke Sasaki, a 1st-year master's student in Computer Science, joined Shun Iwase and Kentaro Yamazaki, both 4th-year Electrical and Electronic Engineering students, in the annual competition sponsored and hosted by Microsoft Corporation in Seattle, Washington. 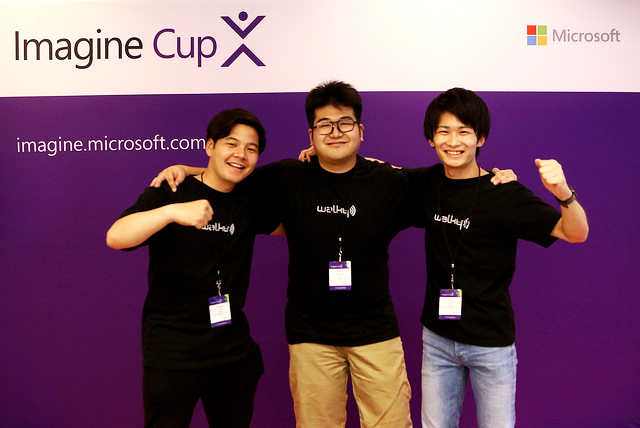 The Imagine Cup, the world's largest technology competition for students, began in 2003. It aims to create new value through innovative products that address some of the world's toughest challenges while developing internationally competitive IT professionals. To date, some two million students from over 190 countries and regions have participated in the event.

After the preliminary rounds, 53 teams representing 39 nationalities met in the World Finals. Representing Japan were TITAMAS with Walky, a handheld device to assist the visually impaired, and Team NeuroVoice from the University of Tokyo with their deep-learning-based voice conversion software.

In the quarterfinals, TITAMAS members were grilled by the judges with questions regarding Walky's retail price, battery life, network environment stability, and image recognition speed — a variety of both technical and business-related questions. The team did their best to impress the judges, but were eliminated amidst concerns about how the product would appeal to potential users. In the wildcard round where teams got a second chance to advance, the members of TITAMAS bravely delivered their two-minute pitch without any slides or tools, but were unfortunately not selected.

Team X.GLU of the Czech Republic won the competition with their blood glucose meter and app for children with diabetes. 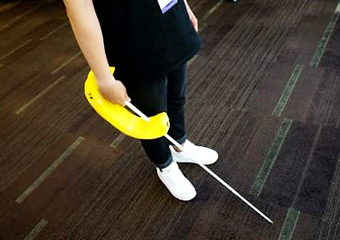 Walky, a handheld device to assist the visually impaired 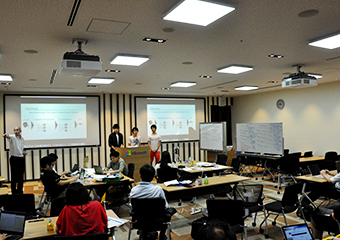 Walky is a smart handheld device developed by TITAMAS which aims to assist the visually impaired on foot. Equipped with a camera and an ultrasonic sensor, the device measures the distance between the user and approaching obstacles, informing the user of these through a parametric speaker. While traditional walking canes can detect obstacles at ground level, they are not particularly useful in case of obstacles where the first point of potential impact is higher off the ground. The Walky idea was the brainchild of a TITAMAS member who wanted to help a visually impaired sibling. 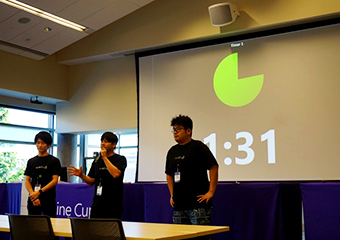 Wildcard round before semifinals

This year's Imagine Cup was an excellent experience. We were able to present our ideas at various locations and get feedback from people with very diverse backgrounds.

We interacted with students from many different countries who all had the same goa l— to test out their ideas and get their creations out into the world where people can make use of them. It was extremely inspiring, and I sensed the importance of both the product itself but also the ability to communicate the merits of this product to the public.

When we started developing our product, I could not have imagined that we would be taking to an international competition such as this one. Technical skills, but also presentation and communication skills were of prime importance, and the Imagine Cup gave me a unique chance to take a cold, hard look at our product and myself. This time we finished in the Top 32. I really want to continue providing new, high-value products to the world, and I thank everyone who supported me!

This was my first time at a competition of this scale, and it was a good experience. The level of all the teams in the finals in terms of product, presentation, and Q&A ability was a reality check for me. There were several teams whose products were already out and making a profit. I feel that perhaps we should have had more people physically try out our product and get direct feedback that way. Still, through my preparations for this competition, I experienced personal growth in terms of how I communicate information about our product to others. I do hope that many Tokyo Tech students actively participate in competitions like this in the future.