President Guo Dongming and a delegation from Dalian University of Technology (DUT), a Tokyo Tech partner university in China, visited the Ookayama Campus on July 7. They met with Executive Vice President Toshio Maruyama and Dean Yuji Wada, Professor Yoshio Nakamura, and Professor Ji Shi of the School of Materials and Chemical Technology. 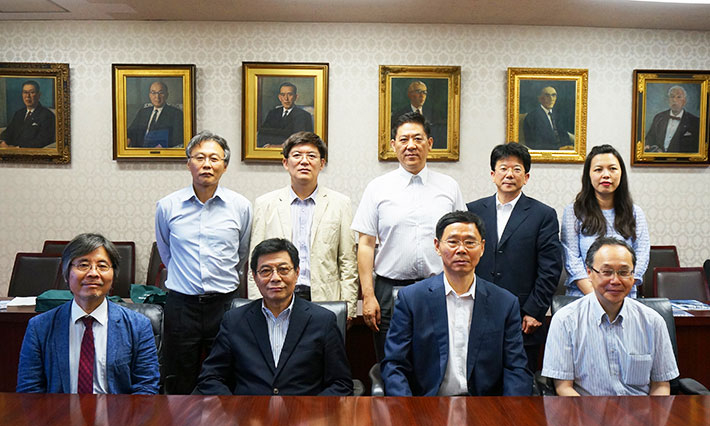 Tokyo Tech and DUT concluded a university-wide cooperation agreement in November 2006. The following year, Tokyo Tech alumnus and DUT Professor Tan Yi and Professor Zhang Jun Shan of the School of Materials Science and Engineering, in cooperation with Tokyo Tech's Department of Metallurgy and Ceramics Science,* established at DUT a materials science course with Japanese as the language of instruction. Tokyo Tech faculty members, including Professor Shi, regularly travel to China to deliver lectures for the course, which today enrolls 30 DUT students a year.

Since 2008, the universities have also organized annual joint workshops on materials science and engineering, which have been hosted alternately in Dalian or Tokyo. Both faculty members and graduate students of the two universities participate.

President Guo explained that because many of his faculty members received their education at Japanese universities, DUT students are strongly encouraged to study abroad in Japan. Tokyo Tech regularly hosts exchange students from DUT who have participated in the Japanese language materials science and engineering course. Guo expressed interest in attracting more Tokyo Tech students to study at DUT.

After the meeting, Assistant Professor Kei Hasegawa of the School of Materials and Chemical Technology and Assistant Professor Zhang Xiaomei of the School of Engineering led the delegation on a tour of the Institute's award-winning Environmental Energy Innovation Building. The two professors are affiliated with the laboratory of School of Materials and Chemical Technology Professor Manabu Ihara, who led the design of the EEI's original smart grid, "Ene-Swallow".

*
The Department of Metallurgy and Ceramics Science was reconfigured under the School of Materials and Chemical Technology in April 2016.