Discovery of a new structure family of oxide-ion conductors “SrYbInO4”

Scientists at Tokyo Institute of Technology (Professor Masatomo Yashima and colleagues, Tokyo Tech) and Australian Nuclear Science and Technology Organisation (Dr. James R. Hester, ANSTO) have discovered a new structure family of pure oxide-ion conductors SrYbInO4. This new material is expected to lead to the development of solid oxide fuel cells, sensors, and oxygen separation membranes. This study would give a clue to solve energy and environmental problems in future.

Because some A2BO4-based materials such as (Pr,La)2(Ni,Cu,Ga)O4+δ exhibit high oxide-ion conductivity, scientists at Tokyo Tech have been exploring new structure families of ABCO4-based materials as BaRInO4, where R represents a rare earth element. Here, A, B, and C are cations located at different crystallographic sites, and A, B, and C in ABCO4 correspond to A, A, and B, respectively, in A2BO4.

Many researchers have investigated the optical, electrical, and magnetic properties of CaFe2O4-type materials, but the CaFe2O4-type pure oxide-ion conductors have not been reported yet. Therefore, Professor Masatomo Yashima and colleagues synthesized a new CaFe2O4-type material, strontium ytterbium indium oxide, SrYbInO4. They investigated its crystal structure from room temperature to 1273 K, its temperature and partial pressure dependence of electrical conductivity, and oxide-ion diffusion pathways. The occupancy factors are also carefully refined using not only conventional X-ray diffraction data but also time-of-flight (TOF) and angle-dispersive-type neutron and synchrotron X-ray diffraction data in order to obtain reliable results. They demonstrate a partial Yb/In occupational disorder in SrYbInO4 through careful analyses of occupancy factors.

Prof. Yashima and colleagues have chosen the chemical composition SrYbInO4, because it contains no transition-metal cation, which leads to less electronic conduction. Moreover, SrYbInO4 was expected to have the CaFe2O4-type structure in the structure field map shown in Fig. 1. Ionic radii of Sr2+ and (Yb3+, In3+) are larger than those of Ca2+ and Fe3+, respectively, thus the SrYbInO4 is expected to have a lower activation energy for oxide-ion conductivity compared with CaFe2O4. 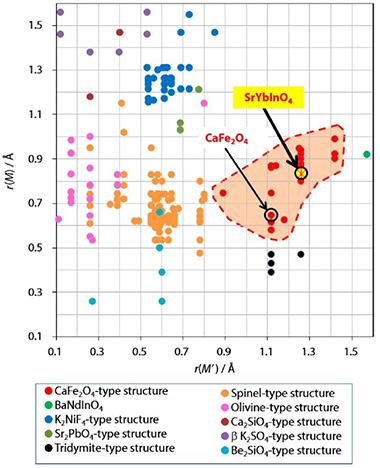 Using neutron and synchrotron X-ray diffraction data and Rietveld method, Prof. Yashima and colleagues showed that SrYbInO4 sample was a single orthorhombic phase with Yb/In occupational disordering at the B and C sites, and no vacancies at the cation and oxygen sites (Fig. 2). Bond valence sums and DFT-based structural optimization indicated the validity of the refined crystal structure of SrYbInO4. Therefore, the new material SrYbInO4 is the first example of pure oxide-ion conductors with a CaFe2O4-type structure.

Yellow isosurface of the BVE at 0.8 eV suggests that the oxide ion migrates in the b direction along the edge/surface of light blue/purple octahedra BO6 [B = Yb0.574(2)In0.426(2)] and purple octahedra CO6 [C = In0.574(2)Yb0.426(2)] where the number in the parenthesis is the estimated standard deviation. ©American Chemical Society.

Further the temperature dependence of oxide-ion conductivity showed lower activation energy of SrYbInO4 (1.76 eV) than that of CaFe2O4 (3.3 eV), which was supported also by the bond valence-based energy calculations. The lower activation energy is attributable to the larger bottleneck size for oxide-ion migration due to the larger ionic radii of Sr2+ and (Yb3+, In3+) than those of Ca2+ and Fe3+, respectively.

Prof. Yashima and colleagues claimed that the oxide ion conductivity of SrYbInO4 could be improved by doping, changing the degree of cation ordering and disordering, and using larger A, B, and C cations in the ABCO4-structure, which leads to further lowering the activation energy and higher oxide-ion conductivity. The findings of this study may open new pathways in the development of ABCO4-based ion conductors.