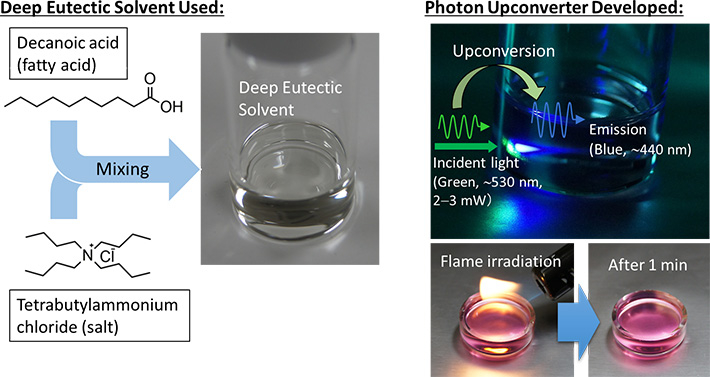 Deep eutectic solvents used as the medium of sensitizer and emitter chromophores (left) and the photon upconverter developed (right). The sample converts low-intensity (a few mW) green light into clear blue emission and demonstrates high thermal stability during exposure to a burner flame for 1 min.

The conversion of solar energy into electricity is currently restricted by a concept known as the Shockley-Quesser limit. This limitation allows only photons that have higher energies than those of the bandgap to be used, while those with lower energies are wasted. In an effort to obtain a solution to this problem and make solar energy conversion more efficient, the process of converting photons with lower energies into ones with higher energies, called photon upconversion, was developed.

In the past decade, a method of photon upconversion that uses triplet-triplet annihilation (TTA) of organic molecules has drawn attention because it is presently the only method applicable to weak light such as sunlight. In this method, two kinds of organic molecules or chromophores, a sensitizer and an emitter, are combined. The sensitizer will absorb a photon and convert it to its excited triplet state. The excitation energy is then transferred to the emitter. When two emitters that have the excitation energy collide, one will convert to its lowest excited singlet state and release an upconverted photon that can be harvested for energy conversion.

While many studies into photon upconversion have been carried out in organic solvents, their practical use is limited due to the high vapor pressures, vapor toxicity, flammability, and lack of thermal stability of the solvent mixtures. Multiple approaches have been proposed so far to overcome these limitations, including the use of viscous fluidic media like ionic liquids that have low vapor pressures and high thermal stability. Ionic liquids are also limited in practicality, however, due to the relatively high costs of starting materials and synthetic processes, as well as their poor biodegradability.

To fundamentally resolve these previous problems, scientists at Tokyo Tech developed a TTA photon upconversion using a new class of liquids known as deep eutectic solvents (DESs). DESs are a potential alternative to ionic fluids, because they possess desirable properties similar to those of ionic fluids and can be created through a simple mixing of two substances, a hydrogen bond donor and a hydrogen bond acceptor, without the need for synthetic processes. The starting substances for the generation of DESs are also generally much cheaper, safer, and more biodegradable than those needed for the creation of ionic liquids, making them an ideal alternative.

The photographs of the DESs used and photon upconverters developed are shown in Fig. 1. The prepared DES was optically transparent and colorless (left of Fig. 1) and used as the solvent for the sensitizer and emitter chromophores. The photographs of the photon upconverter developed are shown in the right of Fig. 1. The sample converts weak incident green light (wavelength: 532 nm; power: 2-3 mW) into blue emission (wavelength: ~440 nm). The expected high thermal stability was confirmed by the absence of ignition and fuming during exposure to a burner flame for 1 min.

Overall, the scientists developed a novel material platform for TTA photon upconversion using cheaper, less toxic, and thermally stable DESs. This achievement is considered as an important landmark for the realization of practical application of photon upconversion technology.