Many institutes and organizations host short, intensive courses, in which students come together for a short time to learn a particular topic or technique. This is a great opportunity for students to study a specific topic rigorously, or to learn something in a field orthogonal to one's own. From January 22 to February 2, 2018, the Earth-Life Science Institute (ELSI) had the opportunity to design and hold such a course — the EON*-ELSI Winter School. 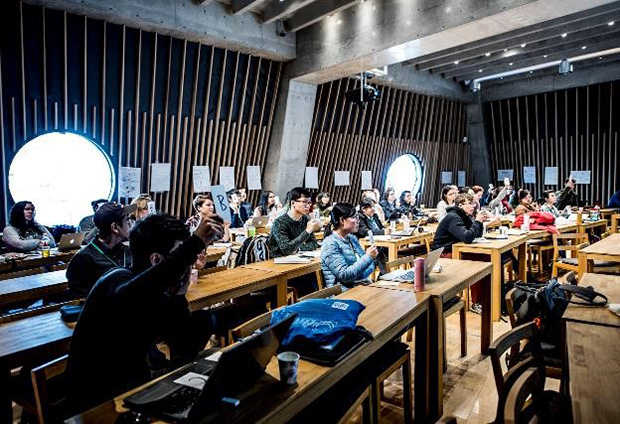 Active learning in the classroom
Photo courtesy of Nerissa Escanlar

The members of the organizing committee of the Winter School were asked to design a two-week course, completely from scratch, that covered the important topics in the entire breadth of the field of Earth-life science. With the field covering so many different research subfields, ELSI wanted to make sure that the Winter School hit on one major point that could differentiate it from the others: interdisciplinarity. ELSI is an inter- and multidisciplinary research institute that focuses on solving important questions in Earth-life science. These questions cannot generally be answered with a simple single-discipline approach; rather, an interdisciplinary approach with teams composed of researchers from various backgrounds is required, something that ELSI is uniquely positioned to do given the range of its researchers' expertise. While many contributors arrived from various domestic and international organizations, a large majority of the Winter School instructors were from ELSI. 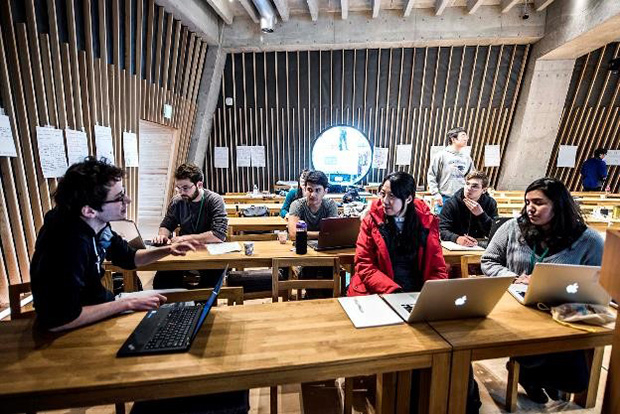 Additionally, very often what is presented during a seminar or a lecture, although interesting and important, may not be easily applied to someone's research. Thus, ideas presented in the classroom may end up passively ruminating in the corner of one's brain. Instead, things that are presented in an active way in the classroom, either through participatory learning or through practical demonstrations, are more likely to be incorporated into a student's active thinking. Because of this, ELSI wanted to incorporate hands-on projects and tutorials in a wide variety of fields that the students could personally learn and do in a short time, and produce something tangible by the end of the session. 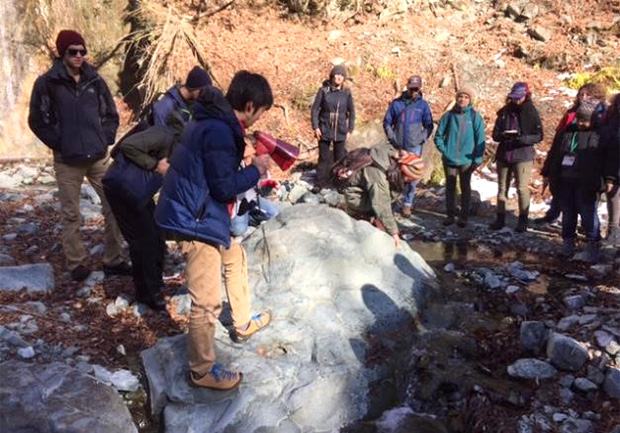 Finally, researchers at ELSI are always treated to something that can't be easily accessed by those at international institutions: Japan. To incorporate different aspects of the geologically diverse nation in the course, ELSI designed a short field trip for the students to explore some of these unique local geological features in Izu. Local field experts were able to show the students faults, hot springs, geysers, plate boundaries, and volcanoes, while in the classroom, participants were treated to special seminars by researchers with expertise in local geology, local gaseous volcano disasters, and even with a visit to the Tokyo Tech Archean rock museum "Museum of Evolving Earth". 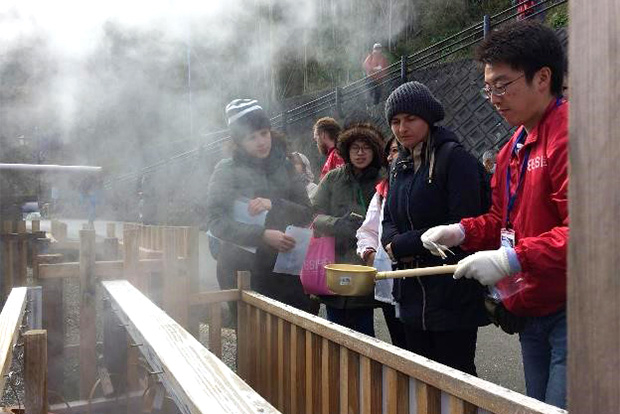 With these major goals of emphasizing interdisciplinarity, hands-on tutorials, and the unique geology of Japan, ELSI hoped that students around the world would be excited by this opportunity to experience the breadth of Earth-life science. The response was overwhelming. ELSI received 227 applications, far more than initially expected, from all 6 populated continents, with a gender ratio of about 50 percent women and 50 percent men. An application even came in from a student who does research in Antarctica!

In the end, the students who did end up coming were a diverse group from all different research fields — life sciences, Earth sciences, physical sciences, and even science education — and institutes based in many different countries — Japan, USA, France, Germany, the UK, Brazil, South Korea, India, Australia, and Thailand. They all embraced the spirit of the Winter School, participating and engaging fully in the field portion, the tutorials and projects, and the wide variety of seminars. It's such an interesting experience to see a biologist ask really hard questions about how the Earth's mantle moves, a geologist give it their all to study the metagenome of an underwater hydrothermal system, or a researcher who normally simulates planetary formation go into the lab for the first time and grow bacteria isolated from their own nose! 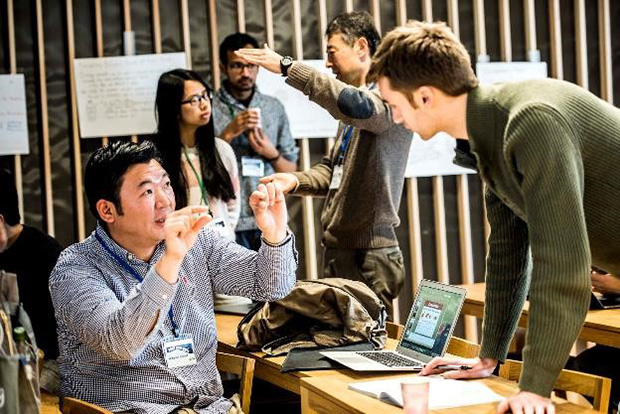 As the students return to their home institutions, ELSI hopes they have gained a deeper understanding about the importance of interdisciplinarity to answering important questions in modern science, and especially the field of Earth-life science. The international network of researchers they have cultivated in just two weeks will be a great resource for each of them in the future, not only due to the breadth of research expertise, but also the unique cultural insights that each person was able to contribute. Hopefully, they will all have ample opportunities in the future to collaborate with one another. 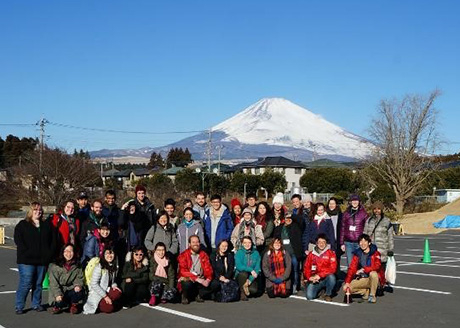 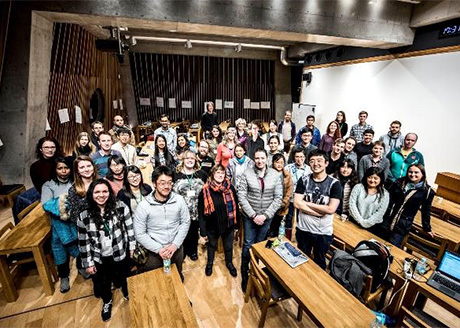 My name is Dylan Gagler. I'm a 1st-year PhD student at Arizona State University. My primary interest is in the origin and nature of life and my research aims to bridge the gap between geochemistry and biochemistry, particularly within hot spring ecosystems in Yellowstone National Park. By incorporating concepts and tools from domains like non-equilibrium thermodynamics, network science, and complex adaptive systems, I hope to provide a rigorous and well-tempered framework for understanding the dynamics and evolution of geobiochemical systems.

In many of ways, the EON-ELSI Winter School lived up to my expectations: field excursions and a slew of interdisciplinary lectures, all wrapped up in an immersive cultural experience. What I hadn't anticipated was for my expectations to be exceeded. Within two surprisingly short weeks, I learned about the geology of Japan, how to model mantle convection, the difficulties of defining the habitable zone, the biochemical basis of life, and virology, among many other things. Integrated into all of this was the near-chronic opportunity to interact and engage with some of the sharpest minds around when it comes to planetary science and origin of life research, all while sharing an important experience with the next generation of origin of life researchers.

Interdisciplinary is a word I think I might have underestimated; the confluence of scientific disciplines at the Winter School was truly impressive. Research areas included prebiotic chemistry, microbiology, planetary atmospheres, magma oceans, the anthropocene...the list goes on. This expansive topical array fostered an ideal setting to explore my proximal scientific territory and improve my scientific literacy. Furthermore, I had the opportunity to practice efficiently transmitting scientific ideas via a technique called ‘scientific speed dating,′ in which 2 groups cycle among each other in 2-minute intervals, explaining their research as concisely as possible. I'd never felt quite this comfortable maneuvering so many scientific concepts.

One of the highlights of the Winter School was our 4-day, 3-night field excursion throughout the Izu Peninsula, where we learned about the unique geology of Japan, and how similar geologic settings may be important to consider for future origins of life research. In the Izu Peninsula, tectonics, volcanology, and microbiology come to an unexpected crossroads as the subduction of the cold, wet Philippine plate drives the emergence of volcanoes and hot springs, a setting which some have argued is plausible analog context in which life may have first emerged. Supplementing our geobiologic forays were stunning views of the cutting mountainous landscapes of rural Japan, the rugged volcanic coastline, and the opportunity to use the well-known Japanese hot springs, the onsen.

Interdisciplinary thinking was again emphasized by group research projects that we engaged in. The project topics and assignments were randomized and I quickly found myself outside of my normal scientific domain, working on a project centered on exoplanets and data analysis. Our team aimed to make better sense of a large and incomplete exoplanetary dataset by applying data analysis techniques like matrix correlations and clustering algorithms (which are commonly used in bioinformatics and phylogenetics). Additionally, we chose to test how classical models of planetary formation held up in the face of such large exoplanetary data. The results of this preliminary investigation were somewhat unsurprising: the classic model of planetary formation (more mass collection further out from a stars orbit in relation to snow lines) seems to be incomplete, with numerous planetary systems exhibiting significant mass distributions within close orbital distances.

All in all, the EON-ELSI Winter School was an exciting and fruitful experience that I'm grateful to have participated in. The field experience and exposure to a wide breadth of topics was engaging and informative, albeit a heavy load to bear at times. The ability to interact with a unique and diverse group of researchers was fulfilling; debates on both the conceptual and philosophical nature of origin of life research were frequent. Tokyo was an amazing place to stay and the EON-ELSI team made sure we were well accommodated. After reflection, I can say with certainty that the EON-ELSI Winter School has changed my thinking about origin of life research, and my personal projects specifically, for the better.

*ELSI Origins Network (EON) was created to form a worldwide and interdisciplinary network, centered at ELSI, for research into the origin of life. Its goal is to bring together existing ideas from different sciences to shape each other's development, and to create a collaborative research community with global vision, which can recognize and ask the next generation of questions. EON is designed to support ELSI's goal to be a worldwide destination for leading-edge research in all aspects of the origin of life, and to internationalize research and higher education in Japan.