Scientists at Tokyo Institute of Technology (Tokyo Tech) developed a motility-reactivation method to help determine how light-responsive changes in flagellar waveform in Volvox rousseletii, a multicellular spheroidal alga, are regulated. These results advance current understanding of how flagellar motility increased in complexity as single-celled organisms evolved into multicellular forms.

As a photosynthetic alga, the spheroid Volvox rousseletii must move in a light-sensitive way to survive. It achieves this by beating numerous flagella toward its posterior end for swimming forward and turning via changing the direction of flagellar motion from back to front if it perceives light. Exactly how this movement is regulated remains unclear, and existing techniques for studying the mechanism underlying flagellar motility are more suitable for single-celled organisms. Drs. Ueki and Wakabayashi at Tokyo Tech modified them for use with V. rousseletii and developed a powerful method of removing cell membranes with a detergent. The scientists call the demembranated V. rousseletii "Detergent-Extracted Volvox (DEV)" or simply "Zombie Volvox". The motility of Zombie Volvox can be induced (reactivated) through the addition of an ATP buffer. Adding other substances can then allow the observation of their effects on motility.

Because calcium ions are a common modulator of flagella beating, the scientists tested its influence on Zombie Volvox. These "dead" organisms proceeded to move as if they were alive and photostimulated (i.e. stimulated owing to sudden change in light intensity); flagella beat toward the anterior direction, and swimming speeds decreased. In contrast, reactivation with ATP only (no calcium addition) caused flagellar beating toward the posterior end and faster swimming speeds, as is the case for live V. rousseletii under continuous light (i.e., no sudden change in light intensity).

Additionally, the effects of calcium addition were stronger on flagella on the anterior region of the spheroid compared with flagella on the posterior end, indicating that the anterior part of V. rousseletii is more sensitive to calcium ions than the posterior part. The sensitivity gradient is critical for appropriate movement in response to light; when light is illuminated from the side, beating direction changes of all flagella will cause the organism to spin instead of orienting toward/away from the light. It is possible that the gradient also allows more fine-tuned, efficient light-responsive motility than what is possible in unicellular photosynthetic organisms.

The researchers highlight how differences in the anterior and posterior hemispheres in V. rousseletii affect the photobehavior of spheroids. Their findings contribute to understanding the evolution of multicellular organisms, specifically changes in their size which require division of labor for effective movement.

Movie. Live Volvox and Zombie Volvox swims in spite of being dead.

Movie shows preparation of Detergent-Extracted Volvox (DEV)s and reactivation of their motility with ATP under Ca2+-free conditions. The movie is run at ×2 speed. 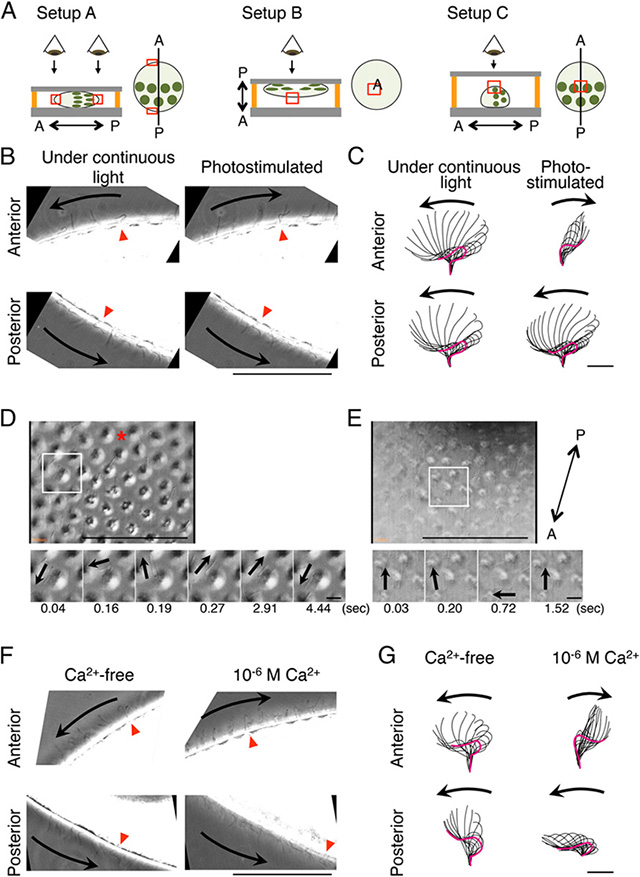 Laboratory for Chemistry and Life Science, Institute of Innovative Research,

*
This article has been updated to correct a typographical error on March 6.