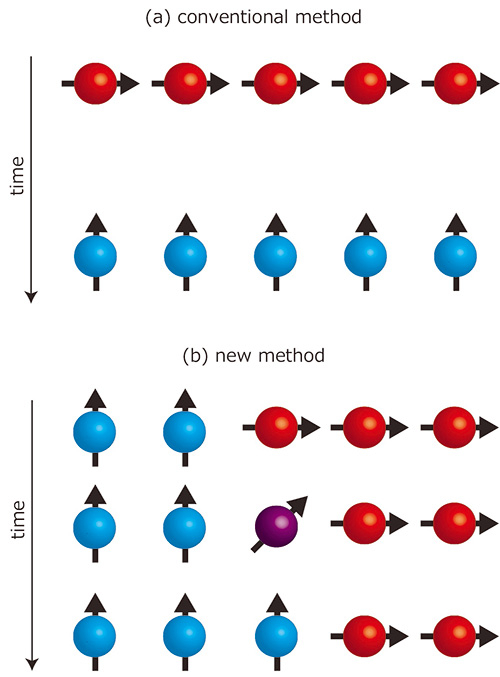 Problems of social importance such as the optimization of traffic flows, machine learning, and the bug detection of computer programs can often be formulated as combinatorial optimization problems. Quantum annealing is a metaheuristic for combinatorial optimization problems, but, unfortunately, it is not always very effective. A simple and typical example is the model with all-to-all connections, in which all qubits interact with each other. In this artificial model, it is known that the time necessary to reach the optimal solution grows exponentially as the number of qubits increases. It has nevertheless been shown for this problem that the time for solution can be significantly shortened by the addition of special terms which represent strong quantum effects. However, the implementation of such terms as practical circuits in the machine is hindered by serious technical difficulties. The research group at Tokyo Institute of Technology has proposed a method by which one can drastically shorten the computation time without the additional special term.

The present method has been shown to be effective for a speedup even for the problem in which the above-mentioned special term does not work to reduce the computation time. This result has been published in the February 2018 issue of the Journal of the Physical Society of Japan.

This method is relatively easy to implement in the practical device. Indeed, the latest model of the annealing machine, built and sold by the Canadian startup D-Wave Systems, realizes a feature corresponding to the present method though in a relatively rudimentary form. The present result is expected to influence the direction of the design of the next-generation quantum annealing machines. Though the present study concerns the special case of the all-to-all connected model, one may expect that theories will be developed for more practically important problems in the near future. If successful, applications of quantum annealing will observe significant advancement. This is a very stimulating research field because basic researches are directly connected with industrial applications.