Across the metal–molecule interface: Observing fluctuations on the single-molecule scale

Scientists at Tokyo Institute of Technology (Tokyo Tech) have developed a technique for analyzing structural and electronic fluctuations on the single-molecule scale across the metal–molecule interface in an organic electronic device. This technique provides information that cannot be obtained using the conventional method, and it has important implications for devices such as organic solar cells. 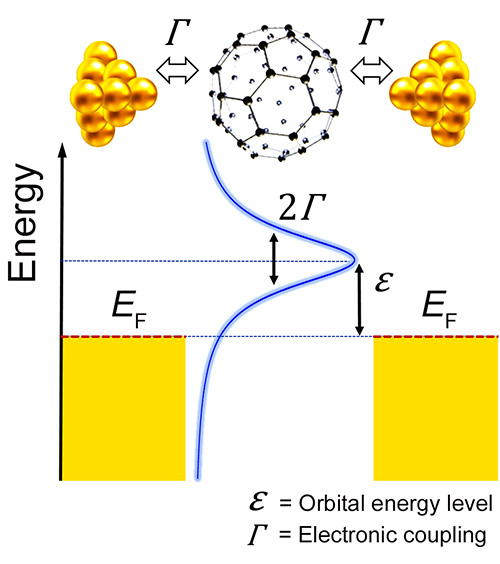 A schematic illustration of a single-molecule junction, where EF is the Fermi level. The metal–molecule interfaces are indicated; the golden balls represent gold electrodes.

The organic electronics field is gaining prominence in both academia and industry as devices such as organic light-emitting diodes and solar cells have multiple advantages over conventional inorganic devices, including much lower potential production costs and broader substrate compatibility. These devices incorporate organic molecules and metal components, and one of the major challenges in this field is understanding the charge transport behaviors across the metal–molecule interface. Recently, break junction techniques were developed, wherein the electric current across a single-molecule junction is measured thousands of times. The measurement results are then analyzed statistically to determine the most probable electrical conductance.

The structural and electronic characteristics of a metal–molecule interface strongly influence the charge transport properties of the single-molecule junction. Further, the metal–molecule interface structures and transport properties fluctuate on the single-molecule scale. Unfortunately, the standard analysis technique of conductance measurement cannot elucidate this behavior sufficiently. Scientists at Tokyo Tech have recently developed a comprehensive method for analyzing these fluctuations. Their technique involves combining two methods: current–voltage measurement through break junction experiments and first-principles simulation. It is worth noting that the developed technique provides a correlated statistical description of the molecular orbital-energy level and the electronic coupling degree across a metal–molecule interface, unlike the standard analysis methods typically employed in this field.

The developed analysis method was applied to various single-molecule junctions, i.e., those of 1,4-butanediamine (DAB), pyrazine (PY), 4,4'-bipyridine (BPY), and fullerene (C60), sandwiched by gold electrodes, and the different molecular-dependent electronic and structural fluctuations were demonstrated. The junctions were stretched by up to 10 nm until breaking during the experiments and simulations in order to identify any structural variations; it was found that the electronic coupling between the electrode and molecule decreases with increased stretching. Further, total energy calculations performed as functions of the stretching distance revealed metastable structures in the structural models.

The developed method provides characteristic information about the simple, low-dimensional, and ultra-small charge transport across the metal–molecule interface, which is relevant to the switching functionality and potential manipulation of transport properties. This novel technique and the information it provides have significant implications for future transport property manipulation in electronic devices featuring organic molecules, such as solar cells and light-emitting diodes. 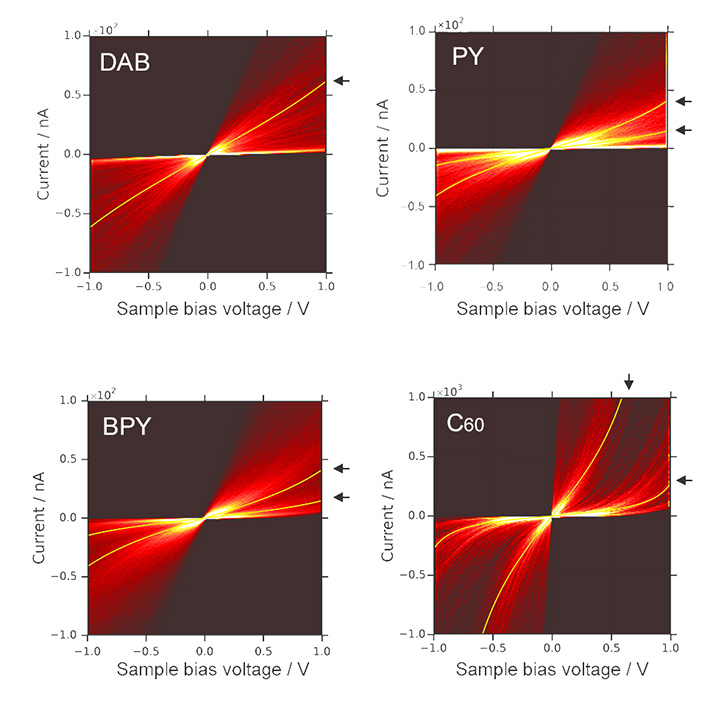