Keeping an eye on the health of structures 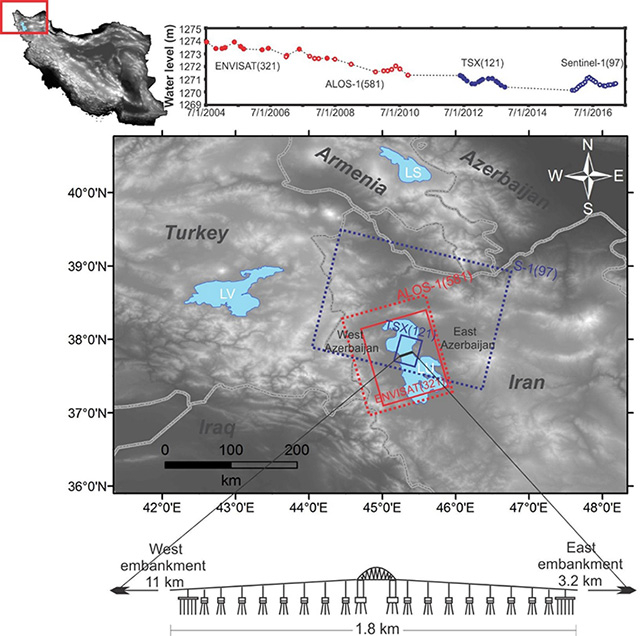 Lake Urmia (LU), its water level over time, and the survey area of the four satellites are shown, along with a topographic map of Iran and a sketch of the Lake Urmia Causeway.

The importance of roads and bridges for humans both during ancient and contemporary times is clearly evident. The structural health and integrity of such large structures are, however, not nearly as evident, mainly because structures tend to deteriorate over a long time. Determining the amount of deformation a structure has undergone (and how much it will undergo in the future) is crucial for ensuring the safety of the people in or near that structure and for minimizing repair costs and potential damage.

One large structure that has raised concerns over the last decade is the Lake Urmia Causeway (LUC), a series of roads and a bridge that go over Lake Urmia, located in northwest Iran (see Figure 1). Iran, known as an arid to semi-arid area, has serious problems with land subsidence due to excessive underground water extraction. Thus, Dr. Sadra Karimzadeh who realized the problem of the LUC and joined a team of scientists at Tokyo Tech, led by Professor Masashi Matsuoka, analyzed the recent deformation patterns that the LUC underwent from 2004 to 2017, using datasets obtained from four satellites equipped with synthetic-aperture radars (see Figure 2). As expected, these datasets required sophisticated mathematical and statistical analyses before the deformation rates (related to the natural settlement of the east embankment and the artificial uplift at the beginning of the west embankment) could be more accurately determined. 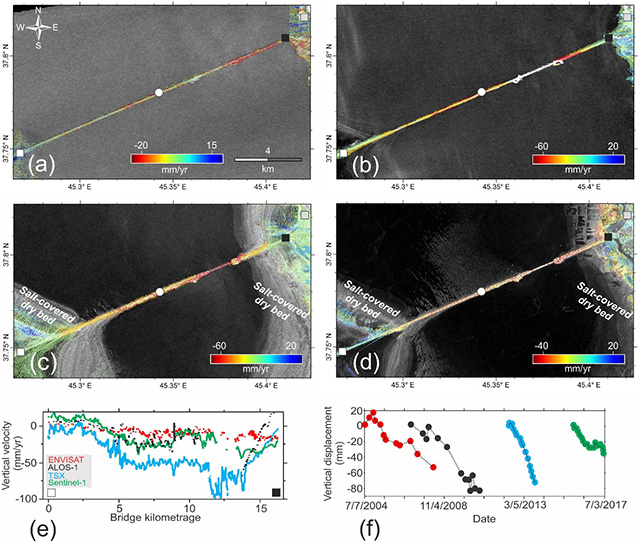 Figure 2. Satellite data for the LUC

The vertical velocities of each part of the LUC obtained by the four satellites are shown in (a–e), while the overall vertical displacement captured by each satellite over time is shown in (f).

Using the small baseline subset (SBAS) technique on the satellites' data, the uncertainty in the obtained vertical displacement rates of the LUC was reduced. The research team also performed a field survey of the lake in 2017 to observe the physical conditions of the LUC and to investigate the most likely causes of the accelerated deformation affecting the structure.

In order to verify their assumptions on the causes of the accelerated deformation, the team conducted a principal component analysis (PCA) on the data and then used a hydro-thermal model to compare results. PCA is a technique that takes multi-dimensional data as an input and flattens them into usually two or three dimensions (referred to as the "principal components" or "PCs"), which can be then used to reveal new and valuable comparative information. Only three principal components accounted for almost all the variability in the data, with the first one (the most significant one) revealing an overall downwards trend in the structure caused by soil consolidation, and the second and third ones being associated to both seasonal changes and human activity affecting the lake (see Figure 3). The team made a prediction as to how much deformation can be expected to occur in the following 365 days.

(a) Loading of PC1, with the inset showing a scree plot indicating that PC1 accounts for most of the variance in the data. (b) Loading of PC2 and PC3, which presumably correspond to seasonal variations, as shown by comparing it to precipitation and temperature. (c) Comparison of the mean displacement of the LUC obtained with a hydro-thermal method and the PCA method, along with the predicted displacement in the next 365 days.

Dr. Sadra Karimzadeh said, "The results of space-based monitoring of critical structures is quite useful in developing countries. It must be continuously utilized at affordable costs."

With this study, the research team demonstrated how PCA can be effectively employed to accommodate data from different datasets over multiple timescales. The combination of the aforementioned techniques prove how data from current and previous satellite missions can be used as an efficient mechanism to determine the current and future health of structures such that preventive actions can be taken to minimize potential damage and reduce costs.