The climate of early Mars is a subject of debate. While it has been thought that Mars had a warm and wet climate, like Earth, other researchers suggested early Mars might have been largely glaciated. A recent study by Ramses Ramirez from the Earth-Life Science Institute (Tokyo Institute of Technology, Japan) and Robert Craddock from the National Air and Space Museum's Center for Earth and Planetary Studies (Smithsonian Institution, USA) suggests that the early martian surface may not have been dominated by ice, but instead it may have been modestly warm and prone to rain, with only small patches of ice. 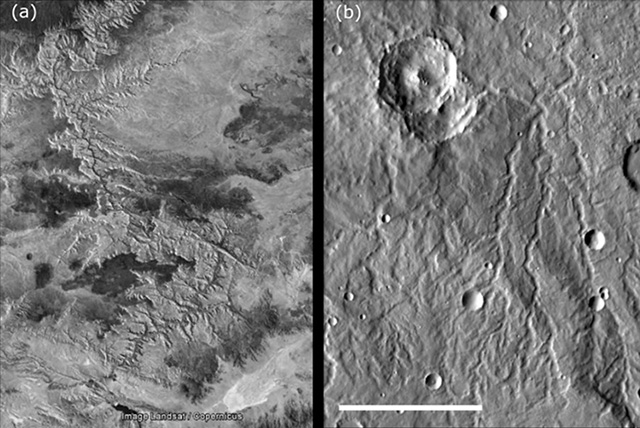 (a) versus a Martian dendritic river system (b) (Arabia quadrangle; 12° N, 43° E). Slight morphologic differences between terrestrial and Martian comparisons may be attributed to the great differences in age. Scale bar is 60 km long. Images courtesy of Google/Landsat/Copernicus (a) and Google/NASA/JPL/University of Arizona (b). Images adapted from Ramirez and Craddock (2018), Nature Geoscience.

While there is little debate about whether water previously existed on Mars, the debate regarding what the climate of Mars was like around 4 billion years ago has persisted for decades. Mars has a surprisingly diverse landscape, made up of valley networks, lake basins and possible ocean shorelines. These ancient fluvial features all provide clues that early Mars may have had a warm and wet climate, similar to Earth’s （Figure 1）.

However, this idea has challenges. First, the amount of solar energy entering the atmosphere at the time was considered to be too low to support a warm and wet climate. Secondly, recent climate studies have argued that Mars’ ancient fluvial features can be accounted for with an icy climate, where widespread surfaces of ice promoted cooling by reflecting solar radiation （Figure 2）. Occasional warming events would have triggered large amounts of ice-melt, and fluvial activity as a result. However, Ramses Ramirez （Earth-Life Science Institute, Japan） and Robert Craddock （Smithsonian Institution, USA） suggest that early Mars was probably warm and wet, and not so icy, after a careful geological and climatological analysis revealed little evidence of widespread glaciation.

The resultant increase in surface reflectivity is represented by a widening blue arrow. Images adapted from Ramirez and Craddock (2018), Nature Geoscience.

Recently, the authors' study, published in Nature Geoscience, argues that volcanic activity on a relatively unglaciated planet could explain Mars' fluvial features. Volcanic eruptions releasing CO2, H2, and CH4 may have contributed to the greenhouse effect, which in turn may have promoted warming, precipitation (including rain), and the flow of water that carved out the valleys and fluvial features. However, this climate would not have been as warm and wet as Earth's, with precipitation rates of around 10 centimeters per year (or less), similar to Earth's semi-arid regions. This drier climate suggests that small amounts of ice deposits could have also existed, though these would have been thin, and liable to melt, contributing to the fluvial system.

In the future, the authors will be using more complex models in their analysis to investigate their warm, semi-arid climate hypothesis further. They will also be aiming to find out what the climate was like before these fluvial features formed on Mars. This will involve investigating the earliest history of Mars, which is a mysterious subject since little is currently known about it.