Solid oxide electrolytes have been extensively studied due to their wide range of applications in solid oxide fuel cells (SOFCs), oxygen membranes, catalysts, and gas sensors. Electrolytes with high oxide-ion conductivity at temperatures below 600 ℃ are required to decrease the operation temperature of SOFCs. Professor Susumu Nakayama at National Institute of Technology, Niihama College has discovered apatite-type oxide-ion conductors in 1995 the extremely high oxide-ion conductivity in the intermediate temperature range below 600 ℃, which has encouraged many researchers to study the structural origin of this phenomenon.

It was believed that the high oxide-ion conductivity of apatite-type materials is due to interstitial oxygens. However, in this novel study, Professor Masatomo Yashima, Dr. Kotaro Fujii at Tokyo Tech, and their colleagues have shown that apatite-type materials contain Si vacancies, but not oxygen interstitials. The Si vacancies in the materials have originally been proposed by Professor Koichiro Fukuda at Nagoya Institute of Technology.

Through single-crystal neutron diffraction studies using the SENJU diffractometer installed at MLF, J-PARC facility (Figure 1), They were able to accurately determine the crystal structures of the apatite materials La9.333Si6O26 and La-rich La9.565(Si5.826□0.174)O26 (□ denotes Si vacancy) including occupancy factors, atomic displacement parameters, and spatial distributions of oxygen atoms. They also measured the density and oxide-ion conductivity of the two materials. In this work, La9.565(Si5.826□0.174)O26 was selected because of its high oxide-ion conductivity.

Figure 1. (a) A schematic figure and (b) a photograph of the SENJU diffractometer installed at the J-PARC facility. (c) Measured single-crystal neutron diffraction images. 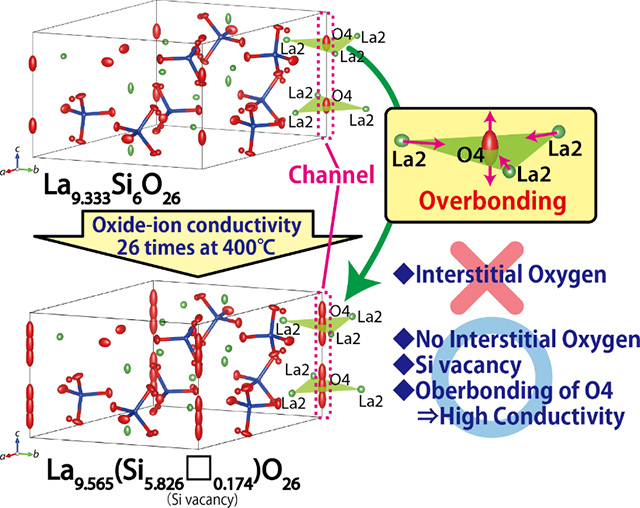 Thus, the researchers proposed that excess La cations are responsible for overbonded channel oxygens along the c axis, which leads to highly anisotropic atomic displacement and high oxygen mobility. Hence this novel concept of "high oxide-ion conductivity by overbonding" may be useful for designing better ion conductors.