A research team lead by Dr. Atsuko Kobayashi of the Earth-Life Science Institute at Tokyo Institute of Technology (Tokyo Tech) and with researchers from two other universities has reported that magnetite (Fe3O4) particles (~ 50 nm in size dispersed in pure water) which are mechanically rotated by external oscillating magnetic fields could disturb the water/crystal interface and promote supercooling during the freezing process. This mineral, naturally present at trace levels in many animal and plant tissues and atmospheric dust, acts as an ice crystal nucleation site and is thus responsible for frost and freezer damage. 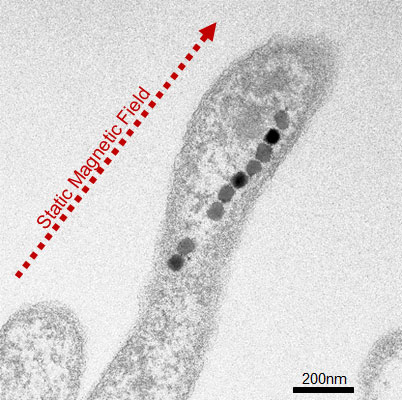 Because magnetite crystals in magnetic bacteria are ferromagnetic, we are able to use magnetic fields to move these crystals when they are present in animal and plant tissues. Our magnetite ice nucleation model took a cue from this observation. Black crystals are single domain magnetite.
(Photograph by A. Kobayashi)

Recent estimates show that up to 40% of the human food supply is lost between farm and dining table; frost and freezer damage is responsible for a significant portion of this. Much of this loss is due to ice crystals breaking cell walls as temperatures drop below freezing (0 ℃). However, at these temperatures ice crystals need to form on something, usually a mineral surface. Kobayashi's team has now identified that material as the tiny magnetite crystals naturally present in most plant and animal tissues. Because it is magnetic, they were able to stop the normal ice freezing process using rotating magnetic fields only 10 to 20 times stronger than that of the Earth. They were able to elicit supercooling in two representative tissues (celery and cow muscle), both of which have detectable, natural levels of magnetite. Variable amounts of naturally-occurring magnetite in the tissues may explain the different freezing properties of different materials. Their results suggest a method for reducing ice damage in agricultural products, organs for transplant, live sperm and eggs, and cold-adapted small animals. The research team found that the volume change is smallest when ice is formed from supercooled water.

Tokyo Tech is the birth place of the Ferrite Industry, led by Profs. Yogoro Kato and Takeshi Takei in the Department of Electrochemistry. In 1930, they invented ferrite, a magnetic material used first for making magnetic recording tape, and later things as diverse as the control of microwave radiation to electronic transformers. Magnetite is the classic Ferrite, and a very strong magnetic material. For Dr. Kobayashi and her colleagues' experiments, they were able to obtain magnetite particles precipitated in an aqueous condition from existing ferrite manufacturers in Japan. These particles have fewer clumping problems than emulsions prepared from synthetic powders, which allowed them to conduct these experiments on freezing. The fundamental and interdisciplinary discoveries in this field are continuing at Tokyo Tech.

The discovery that nanocrystals of magnetite are one of nature's most potent ice nucleation materials indicates that this mineral, naturally present in many plant and animal tissues, is responsible for frost and freezer damage. As ice formed from supercooled water is less damaging to tissues, the ability to control ice nucleation with tailoring magnetic oscillations offers the promise of developing better technologies to minimize agricultural waste.

Ice crystal nucleation is a fundamental feature of Earth's climate and environment, as well as that on other planets. The magnetic effect on ice crystallization will influence any environment in which nanophase magnetite is a component. Strong static magnetic fields on some planets (like Jupiter) could actually enhance magnetite's role, and the lack of a field on other planets would decrease it.

Many scenarios for the origin of life depend on ice crystals forcing prebiotic molecules together, this will also be influenced by local magnetic fields.

For planetary science, extra-solar water-world planets that lie within in the habitable zone where water is liquid will have fundamentally different water cycles, without the dust-born magnetite to initiate cloud convection, and so on. Understanding the role of magnetite to the global climate may lead the better model for predicting the weather.