Beyond the limits of conventional electronics: stable organic molecular nanowires 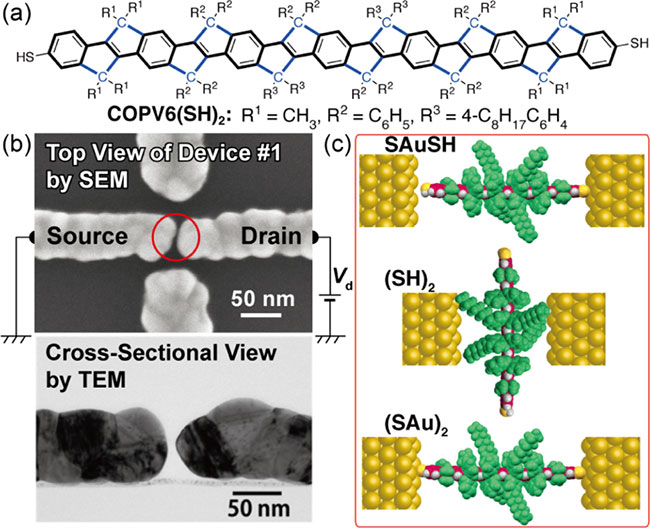 (a) Molecular structure of the COPV6(SH)2 molecule. (b) Top and cross-sectional views of an ELGP nanogap electrode. (c) Different ways in which the molecule binds with the nanogap. The thermally stable device is obtained when the first type of binding (SAuSH) occurs.

The traditional methods and materials used for the fabrication of modern integrated circuits are close to reaching (or have probably already reached) their ultimate physical limitations regarding the size of the final product. In other words, further miniaturization of electronic devices is nearly impossible without delving into other types of materials and technology, such as organic molecular electronic devices. However, this class of devices generally operates properly only at extremely low temperatures because of the thermal fluctuations of both the organic molecules and the metal electrodes.

While special electroless gold-plated nanogap electrodes, called ELGP electrodes, have demonstrated exceptional thermal stability at their gap, new classes of molecular wires have to be developed to address the aforementioned issue. Because of this, a team of scientists, including Professor Yutaka Majima from Tokyo Tech, focused on a 4.5-nm-long molecule called disulfanyl carbon-bridged oligo-(phenylenevinylene), or COPV6(SH)2 for short.

This molecule, shown in Fig. 1 (a), has a rigid rod-like pi-conjugated system, which is electronically and spatially isolated from its surrounding by four 4-octylphenyl groups. The molecule has two sulfhydryl terminals, which may or may not bind chemically with the opposing gold surfaces of an ELGP nanogap, shown in Fig. 1 (b). Interestingly, the research team found that when the COPV6(SH)2 molecule binds with gold surfaces in a specific way, called SAuSH, as shown in Fig. 1 (c), the resulting device shows the characteristic behavior of coherent resonant electron-tunneling devices, which have an array of potential applications in electronics and nanotechnological fields.

Most importantly, the resulting device was thermally stable, showing similar current vs. voltage curves both at 9 and 300 K. This had not been achieved before using flexible organic molecular wires. However, as shown in Fig. 1 (c), there are multiple ways in which the COPV6(SH)2 molecule can bind at the ELGP nanogap, and the team currently has no way to control the type of device they will get.

Despite that, they measured the electrical characteristics of the devices they obtained in order to explain in detail the underlying quantum mechanisms that determine their behavior. In addition, they verified their findings with theoretically derived values and, by doing this, they further reinforced their knowledge on the operating principle of the SAuSH device and the other possible configurations.

The next challenge is to obtain a better yield of the SAuSH device, because their yield was less than 1 %. The team believes that the rigidity and high molecular weight of the molecule, as well as the stability of ELGP electrodes, would be responsible for the high stability of the resulting device and its low yield. Given the many possible variations of the COPVn class of molecules and the various ELGP nanogap configurations, the yield problem may be resolved via adjustments in the methods and the characteristics of the molecules and gaps used. The data reported in this work will provide a foundation for future molecular-scale electronic research.